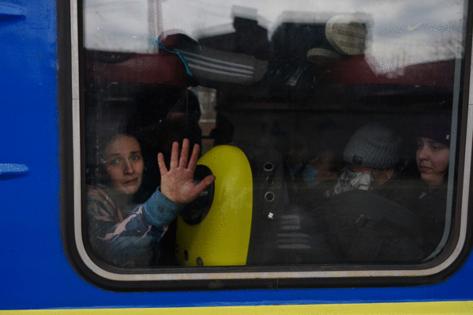 As Russian President Vladimir Putin continues to suffer humiliating battlefield defeats, his growing desperation may lead him to conclude that Russian-backed terrorist attacks against Western countries are a legitimate response. Attacks could be directed toward European military targets, NATO-related facilities or even civilians. Russia’s conduct in Ukraine, Syria and Chechnya has demonstrated that for Putin, nothing is beyond the pale.

As Russia’s ill-fated war in Ukraine continues to sputter, there are serious concerns over how Putin might respond. To deflect from how the war is affecting Russian citizens — Putin recently called for the mobilization of 300,000 civilians — Moscow has tried to frame the conflict as being between Russia and the North Atlantic Treaty Organization, not Russia and Ukraine.

Because NATO countries have been supplying Ukraine’s military with weaponry and training its soldiers, the Kremlin has engaged in nuclear saber-rattling against them, raising concerns that Russia could use a tactical nuclear weapon in Ukraine. But the more likely scenario, and one several rungs down on the escalation ladder, would be direct attacks on Western soil. Russia might seek to conduct acts of sabotage against NATO supply lines in Poland or Romania.

Postings last week on the Telegram channel operated by Rusich, a neo-Nazi mercenary cadre, put out a call for pro-Russian partisans already on European soil who are willing to block the transfer of NATO personnel and equipment, hold local “demonstrations and actions” against the war with the Russian Federation or solve other problems.

Rusich is closely aligned with the Wagner Group, a Russian private military contractor that has been accused of committing war crimes in Ukraine, the Middle East and Africa. The appeal for individuals to take action in Europe has been translated into English, German and Polish — and could attract pro-Russian Westerners to engage in acts of terrorism in their home countries.

In March, the former national intelligence officer for Europe, Christopher Chivvis, suggested that Russia might use Wagner operatives to launch attacks on NATO territory.

It certainly would not be the first time Moscow was brazen enough to use terrorism on European soil.

Russia has been accused of killing Alexander Litvinenko, an intelligence officer who defected to the United Kingdom, with poison in 2006. Russia has also been implicated in the use of a military-grade nerve agent in a 2018 attempt to poison Sergei Skripal, a former Russian military intelligence officer, and his daughter in Salisbury, England; an Englishwoman who came into contact with what is thought to be the same nerve agent died as a result. In 2019, Russia allegedly deployed an assassin to Germany, where he murdered a former Chechen separatist commander on a Berlin street, shooting him in the head twice with a handgun equipped with a silencer.

Both the Czech Republic and Bulgaria have expelled Russian diplomats after accusing Russian intelligence officers of bombing weapons depots and ammunition dumps in their countries, actions that resulted in the deaths of civilians.

Experts on terrorism designations, including Jason M. Blazakis, a former director of the U.S. State Department’s Counterterrorism Finance and Designations Office, have made a strong case that Russia already qualifies as a state sponsor of terrorism, although the Biden administration has so far refused to take the step of labeling it as one.

Another major consequence of Putin’s disastrous invasion of Ukraine is more long term. With citizens now fleeing Russia in droves to avoid being conscripted and used as cannon fodder, countries in the surrounding region are preparing for an influx of foreigners. Coupled with Ukrainians who have been forced to flee Russia’s indiscriminate shelling of civilian areas, countries across Europe will once again be forced to grapple with domestic tensions that arise from migration.

So far, the wave of migrants from Ukraine and Russia are receiving a friendlier welcome than those who immigrated to Europe from the Middle East and Africa in 2015, when 1.3 million asylum-seekers sought refuge. But when large numbers of foreigners arrive in countries, it inevitably leads to political instability, questions of identity and ethnic, religious and socioeconomic tensions.

Historically, such situations lead to a rise in populism, nativism and xenophobia, which far-right political parties use as leverage in the polls. Ironically, those fleeing to third-party countries are doing so to escape Russian atrocities, yet their arrival in new lands will likely give a boost to the same political parties that receive support from Russia. The fringes of these political movements go on to serve as the foot soldiers of the far right, and include neo-Nazis, white supremacists and a range of other ideologically motivated violent extremists. High-profile attacks against migrants and refugees have been carried out by far-right extremists over the past several years in Italy, Sweden, Hungary and elsewhere in Europe.

Russian-backed terrorism may not be relegated only to Europe.

Since the United States is the primary supplier of high-tech weaponry to Ukrainian forces, it seems plausible that Putin could attempt to target U.S. embassies in Europe, carry out cyberattacks against U.S. government networks or, in the most drastic scenario, execute an attack on U.S. soil. Moscow could also step up efforts to promote disinformation among U.S. populations, meddle in the November midterms and continue to amplify divisive issues — race relations, abortion, vaccines — that could result in violent extremism.

Even with the increased risk of blowback, the West simply cannot make decisions about the Ukraine-Russia conflict based on the vague threats Putin makes. NATO leaders need to make clear that acts of terrorism on Western soil traced back to the Kremlin will lead to greater U.S. and European involvement in Ukraine — not less.