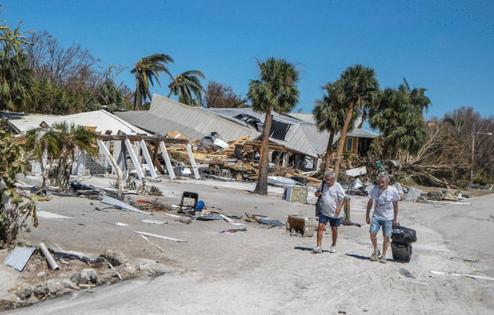 The stories coming out of the most hurricane-devastated areas of Florida’s Southwest coast are heart-rending: Residents leaving on foot from Fort Myers Beach, rolling small suitcases of whatever they could salvage. Pleas for food, water, propane and toilet paper posted on social media. Pine Island, Naples, Matlacha — all hit hard. Sanibel cut off by a severed causeway.

Deaths, mostly from drowning in the storm surge, are continuing to climb. Already, the finger-pointing has started. Whose fault is it that so many people remained in harm’s way when a monster of a storm like Ian hit?

Even residents who lost their homes haven’t been spared criticism for riding out the storm instead of leaving. Defying evacuation orders is irresponsible and burdens first responders. But judgment should be withheld until we learn more about why people stayed put and whether they had enough time and resources to leave.

Though it’s still too early to know exactly what happened — we also must remember this was a natural disaster, not a controllable event — there are far-reaching questions that need to be answered, and quickly, so we can learn from this horrific storm for the next time.

— Lee County officials. Did Lee County violate its own protocols and delay issuing mandatory evacuation orders until it was too late for some? County officials waited until Tuesday, a day later than other coastal communities, to announce evacuation orders. Some residents have complained that gave them little time to plan. A New York Times analysis found that Lee County’s emergency-planning guidelines call for initial evacuations if there is a 10% chance of a 6-foot storm surge. Forecasts on Monday warned that Cape Coral and Fort Myers had a chance of 10% to 40% of that happening. Local officials have stood by their decision, saying the initial modeling showed Ian heading north, even though storm surge was already predicted along Lee County’s coast on Sunday night.

— Who will investigate? Brushing off criticism when the death toll continues to climb won’t go down well with the public and prevents the state from learning possible lessons. Someone needs to look into whether Lee County ignored its own protocols and what, if anything, could have prevented so many deaths. On Monday, Lee County’s sheriff announced the death toll in the county had reached 54. So far, Florida officials have linked about 100 deaths across 10 counties to Hurricane Ian.

A local or statewide grand jury would help Floridians understand what, if anything went wrong, so that it doesn’t happen again. Grand juries have often been impaneled after tragedies such as the Surfside condo collapse and the Parkland shooting to look at systemic issues that need addressing.

— The forecast. Fort Myers was in the “cone” set by forecasters, but the storm was predicted to hit the Tampa Bay area most strongly. We’ve been told for years not to focus on the skinny black line in the middle but to take precautions if we’re in the cone. But we may need to consider a revision in the way we communicate the forecast, so residents aren’t caught unprepared for storm surge or for winds — even beyond the cone.

— Hurricane Irma. Irma hit Florida in 2017, plowing up the middle of the state and triggering some 7 million people to leave their homes. Heavy traffic clogged roads as the Category 4 storm menaced the state. But by the time it actually hit the mainland, it was a Category 3, and much of the state experienced tropical-storm-force winds while the Florida Keys got pummeled. Did that experience lull residents into believing this storm would be the same?

— Gov. DeSantis and emergency managers. Did the governor and state emergency managers convey enough of a sense of urgency about evacuating? On the Sunday before the storm hit, the governor offered this assessment: “If there’s an evacuation notice — cops aren’t going to come and drag you out of your house, you’re going to make those decisions. But, when that is issued, that’s a view that there’s a hazard by remaining in that area. So, we just want everybody to know that and hopefully be able to make the best decisions for themselves and their families.”

And by the time the storm was close, he was warning of a “major, major storm.”

Personal responsibility must play a role. But which message did people listen to?

— Barrier islands. Not even the strongest of hurricanes is likely to affect people’s desire to live near the beach. It’s a highly unpopular and expensive idea to stop people from rebuilding in storm-vulnerable areas, but if storms like Ian continue, at what point do we have that conversation?

— Homeowners without insurance. It appears much of the damage from Hurricane Ian was caused by flooding. Though many Floridians must carry hurricane insurance, only 30% of homes in Charlotte and Lee counties have flood insurance, the Herald and Tampa Bay Times reported.

There will be some government help for those without insurance to cover this catastrophe, but it’ll be limited. What will happen to people whose insurance won’t come close to covering the loss of their homes?

The priority must be on providing immediate relief to West Coast residents, especially those on barrier islands still cut off from the world. But Floridians also deserve to know if there was any way to reduce the number of fatalities and the enormous amount of damage.

As the state shifts from shock-and-rescue mode into reconstruction and assessment of its response to this historic storm, we have to learn the terrible lessons of Ian. The best way to do that is an unflinching and transparent examination of exactly what did — and didn’t — happen.