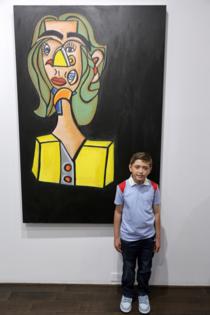 The world of abstract art is a mystery to me, as I imagine it is for most people.

When you're talking about colorful splotches on a canvas, what invisible committee decides that one person's talent towers above another's?

Who sets the seemingly crazy prices that collectors are willing to pay? It's all very opaque.

But one thing I do know: Every few years, a child artist emerges from obscurity, hailed as a pint-sized Pollock or Picasso. Far too young to have attended art school or to have studied anything about the history of art or the development of abstract painting, the child emerges from diapers, allegedly, as a fully formed abstract artist.

Each origin story is similar to the next: The child started painting as a toddler, they need a step stool to reach the top of the canvas, their parents are perplexed by all the attention and worried it will be harmful to their emotional development. Until, that is, it becomes clear that people pay money, lots of it, for this sort of novelty. Then the parents reluctantly allow the child to keep working … and keep selling.

A complicit media — always on the lookout for a fresh take — swoons over the child's oeuvre, of course, but mainly at the prodigious sums commanded by whatever gallery has chosen to champion the baby Braque.

Monday, when I read about a 10-year-old San Diego boy whose Cubist-inspired canvases are selling for six figures, I rolled my eyes and thought, Here we go again.

"The contemporary art world has had more than its share of young talent, but it's tough to recall an artist who has generated as much early-career recognition as Andres Valencia," reported The New York Times.

Much as I hate to disagree with the other Times, in this case I must.

In 2009, an Australian girl named Aelita Andre, hailed as a painting prodigy, had her first solo exhibit. She was 2. When she was 4, she had a solo exhibit in New York City. Television's "60 Minutes" aired a segment calling her "The Next Big Thing." An art professor who was unaware of the child's age called her paintings "very credible abstract works" and an "antidote to the oppressive qualities of expectation in western painting."

But the art historian Noah Horowitz had a different take in 2011 when he critiqued her in a New York Times essay. "So is Aelita's claim to artistic fame legitimate? Certainly not," he wrote. "But as a piece of theater, the circus encircling her isn't half-bad."

A few years earlier, a very similar circus had encircled a 4-year-old girl from Binghamton, New York. Marla Olmstead was the fleeting toast of the abstract art world until "60 Minutes" (them, again) received permission to put a hidden camera in her basement studio. The resulting footage raised uncomfortable questions about whether she was the sole author of her work. Sales dried up faster than an open jar of finger paint.

To try to salvage the family's reputation, Marla's parents agreed to allow documentary filmmaker Amir Bar-Lev into their lives. Over the course of filming, he began to have doubts about the originality of Marla's work. The tagline for his 2007 film, "My Kid Could Paint That," was "Inspiration or Manipulation? You Decide."

It was not exactly the exoneration the Olmsteads had hoped for, as it left the question of authenticity up in the air.

When I asked my colleague, art critic Christopher Knight, what he made of the latest story about a child art prodigy, he replied, "the new Alexandra Nechita — the Petite Picasso!"

I had to look her up. Turns out Nechita was yet another abstract art "prodigy."

In 1996, when she was 10, the Los Angeles Times published a feature story about her beneath the headline "Alexandra the Great." The story quoted art experts with dramatically conflicting takes. Some found her exceptionally talented. Others not so much.

"What it does is feed into the classic argument that drives us all crazy in the art world that my 10-year-old could have done it," one local museum curator told the Times. "It's really a travesty."

I don't doubt that any of the children hailed as prodigies over the years have been talented in some way, or that their art embodies the qualities of freedom and innocence that all adults wish they still possessed. But is there anything truly original happening here? Doesn't seem like it.

"Kids are natural mimics," Knight told me, "especially when it comes to the wild and wooly abstractions of Modern art."

I am a firm believer that you need to understand the rules before you break them. Pablo Picasso, the son of an art teacher, and something of a child prodigy himself, attended art school in Madrid and Barcelona from a young age. He mastered representational art before his evolving aesthetic helped lay the very foundation of Modern art.

There is a reason why no child has produced an original work like Da Vinci's "The Last Supper" or his "Mona Lisa." They don't have the technical skill.

I admit, I still remain somewhat befuddled by some of the highly praised abstract work I see in museums and galleries. But I respect the artists' journeys from the traditional to the groundbreaking and yes, even the perplexing. To appreciate artists, especially abstract and conceptual artists, it helps to understand the context in which they are creating.

Kid artists have no context; their work lacks meaning. Pretending otherwise might be good for a news story, a gallery show or a five-figure sale. But that's about it.

Beneath the still-gleaming white dome, the Capitol’s new generation of promising leaders are jockeying for position, staking their turf, marking their hydrants, and swapping last-minute promises for next year’s power. ...Read More

Many companies promising “net-zero” emissions to protect the climate are backing that claim by investing in vast swaths of forests to recapture carbon. It turns out this strategy isn’t working very well.

Protest movements routinely bring symbols that help define their cause. Umbrellas serving as shields against pepper spray came to symbolize demonstrations in Hong Kong in 2014 and again in 2019 as citizens protested anti-...Read More

The dismantling of CNN as the Democrats’ leading network could be on the way with layoffs and cutbacks putting the once-dominant media outlet in decline.

CNN began notifying staffers on Wednesday that there would be ...Read More

Listening to Monday’s U.S. Supreme Court arguments about two prosecutions won by former Manhattan U.S. Attorney Preet Bharara, it seems likely that the bad guys will go free. If and when that happens, consider it a lucky...Read More

In the beginning, God created the heavens, the earth and American higher education. We lived in a bucolic state of nature until an evil serpent, U.S. News & World Report, tempted us to partake of the Tree of Knowledge: ...Read More