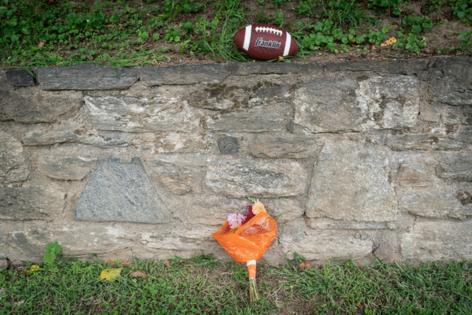 What police seem to know 24 hours after America's latest firearms outrage is that five shooters and the driver of their SUV targeted at least one of the teenage Roxborough High School football players. One of the players, a 14-year-old named Nicholas Elizalde, of Havertown, died, the 23rd kid killed in Philadelphia this year.

Three remained hospitalized. One victim escaped with a graze wound. The shooters and the driver escaped.

The police weren't sure of the motive for the attack.

"It's surreal, for sure," said Ashley Hunter, the mother of one of the victims. "I'm just so numb to it. It's happening every day. I feel for all victims, but when it's your own, it hits harder."

"We're getting out of here," she added. "This city is getting crazy."

The breathtaking shock of such violence delivered curbside at one of our schools chills the blood and freezes the heart. It also should trigger the mind. It won't.

What we all know, for sure, is that no place in the United States is safe, and that this sort of thing will happen again.

This happened, and will continue to happen, because you don't care enough to make it stop happening. At least, not enough of you care.

Too many of you would rather misinterpret a badly written constitutional amendment bastardized to profit a grossly inflated industry. You would rather fetishize your weaponry. The most extreme of you are convinced that your hand-held weapons will somehow fend off an oppressive government's tanks and helicopters.

You'd rather pretend that "a good guy with a gun" would really make a difference, knowing full well that all the analytics prove that "good guys with guns" are so statistically irrelevant as to be nonexistent.

If you can stomach 20 first graders and six educators at Sandy Hook Elementary in 2012, then this won't move your empathy needle. If you can stomach the 17 dead and 17 wounded at Marjory Stoneman Douglas High in 2018, this will not register on your outrage Richter scale. If you can compartmentalize the Pulse atrocity in Orlando, Florida, in 2016 — 49 dead, 53 wounded — then what is this to you? And if you can stomach the cowardice and the cover-up that happened despite all those "good guys with guns" at Robb Elementary in Uvalde, Texas, this won't cost you one wink of sleep.

Why? Because too many of you have accepted guns and gun violence as part of your life.

The reality you have chosen for all of us is that, no, football players on school grounds are not safe. Neither are 6-year-olds and high schoolers in their classrooms. Or dancers in a nightclub.

What happened Tuesday and what has happened at Sandy Hook and MSD and Pulse and Robb aren't exactly apples-to-apples, but they're not apples-to-oranges, either. They're different varieties of the same apple. Politicians and gun lobby mouthpieces on Fox News Channel have pointed to our mental health issues, and, certainly, we have a mental health crisis in this country.

But more than that, we have a violence crisis.

We have a gun crisis.

The most dangerous facet of our mental health crisis is the insanity that underpins the arguments against gun control. Wanna hear unreasonable and crazy? Tell gun nuts they can't have their AR-15.

It doesn't matter whether an AR-15 was used in this assault. What matters is, unless these shooters were handy with bolt-action .270s, the guns they used were built to kill other humans. And, yes, unless you're hiking in the Rockies or Appalachians and worried about snakes, a handgun is meant to kill people, too.

The only reason these instruments of death are available cheaply and without little restriction is because you want them to be. According to a database run by everytownresearch.org, in 2022 there have been 113 incidents of gunfire on school campuses resulting in 41 dead and 82 wounded.

Ironically, earlier Tuesday, Philadelphia Mayor Jim Kenney signed an executive order banning guns at city recreation centers and playgrounds — an order that certainly will be challenged by the National Rifle Association. It is what they are.

After all, the NRA opposed the commonsense, relatively toothless gun safety law President Joe Biden signed in June. There is no bottom.

As I have written before, I've been familiar with firearms my entire life. We had rifles, shotguns and handguns on the farm where I was raised. My father was a prolific hunter, trapper and fisherman. Every single gun had a purpose: to dispatch a creature for food or pelt. I know guns and what they can do.

So do these guns in question — to kill and maim humans. And they are lethally efficient in that purpose.

Absolutism is a tiresome canard.

Americans own 393 million guns, or 1.2 guns per citizen. They are everywhere, legally and illegally, and we see them and shrug. It's part of the fabric of our society that we accept.

It's always shocking when horror arrives at your doorstep. You always think it won't happen to you. It's always going to happen to someone else.