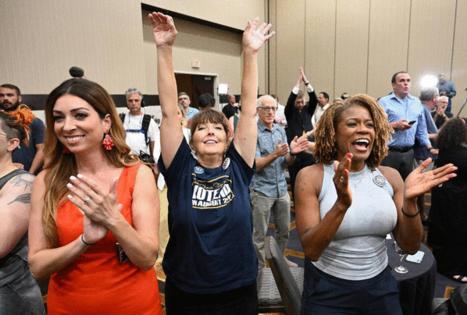 The failed Kansas referendum to constitutionally ban abortion showed Palmetto State Republicans that they need to keep doing what they’re already doing: Ignoring reality, making life worse for a chunk of South Carolinians and answering only to the most extreme of their gerrymandered bases.

A July poll found that 61% of South Carolina voters support abortion. Almost 70% believe that it’s a woman’s choice to get an abortion and that lawmakers shouldn’t interfere with that choice. Those percentages align with national polls.

The South Carolina GOP has no need for the pesky facts.

Republican lawmakers have pushed the anti-abortion narrative in South Carolina with a charade of public feedback sessions which are stacked with zealots who says things like “murderer” and “Jezebel” anytime a woman talks about having an abortion.

Listening to this vocal minority of anti-abortion advocates is causing Republicans to cannibalize each other and be eaten up by their supporters.

“I view all of this with frustration and contempt for the crayon-level discussion of our public discourse on this issue,” state Rep. Micah Caskey, R-Lexington, told Politico.

That Politico article was about “partisan infighting and struggling to agree on how far to go” in the Republican party when it comes to abortion, wrote reporters Megan Messerly and Alice Miranda Ollstein.

“I’m told that a year ago I was a crazy fanatic for supporting a six-week ban,” Caskey said. “Now the goal post has been moved such that if I don’t support a complete and total ban whatsoever that I’m not pro-life?”

If South Carolina were to have a statewide vote on a constitutional amendment referendum, also called a ballot initiative, on abortion like Kansas, a super majority of legislators would have to vote to put the question on the ballot. In the GOP-controlled State House, Republicans would have to be of one mind to call for the abortion ballot initiative.

Beyond knowing they won’t win the ballot initiative, Republicans won’t put abortion on the ballot because that will drive Democrats to the polls in the next presidential election.

Now, if what you’re hearing is that Democrats need to put this anti-abortion nonsense to rest with a ballot initiative, think again.

The desire to give Republicans and anti-abortion zealots another punch in the face like they got in Kansas is a strong one. But here’s what’s up.

First, S.C. Democrats can’t do it. Democrats don’t have nearly the numbers in the State House to force a ballot initiative that would change the constitution to say women have a right to abortion.

Second, they shouldn’t do it even if they could. Why? Because it’s a waste of time and does nothing to help increase access to legal abortion.

Even if South Carolinians voted for a constitutional amendment to guarantee the right to abortion, Republicans will keep their six-week abortion ban in place, which pretty much outlaws the procedure because most women don’t know they’re pregnant until after six weeks.

Democratic lawmakers need to spend their time fighting a total abortion ban, ensuring that whatever abortion restrictions the state does implement includes exceptions for the mother’s health, rape and incest and being prepared to expand access to abortion when the chance arises.

According to South Carolina abortion providers, most women who have abortions already have a child. These women are low income and often working on minimum wage. They’re going through with the procedure because they can’t afford another child.

Think of how sad a reality that is. Then think of who’s in power in South Carolina.

If Republicans really wanted fewer abortions in the state, they should focus on expanding health care and raising the minimum wage significantly so women can pay the costs of bringing up a child.

The GOP will never do that because it might actually work.