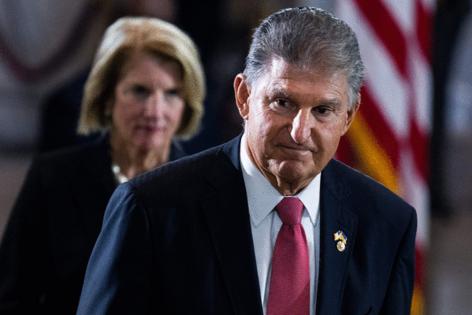 By what possible definition of democracy is it OK for Joe Manchin, a single senator elected with a mere 290,000 votes from the tiny state of West Virginia, to wield power that exceeds that of his 99 colleagues and rivals that of the president of the United States?

The self-described "conservative Democrat" appears to have just decided what our national climate change policy will be. Before that, he decreed the future of the filibuster. For all intents and purposes, he gets to say what President Joe Biden's legacy will be.

He's in total control, it sometimes seems. But why him, of all people? Well, it's the numbers, stupid, as James Carville might say.

Manchin is one of a tiny handful of senators who sit smack at the center of a U.S. Senate evenly divided between Democrats and Republicans. Because the vast majority of his colleagues vote reliably with their political parties while he does not, his vote is often the only one in play. It's often the single, pivotal "yea" or "nay" that can make or break trillion-dollar deals and ambitious policy goals.

That decisive swing vote — also wielded occasionally by several others including Kyrsten Sinema, D-Ariz.; Susan Collins, R-Maine; and Lisa Murkowski, R-Alaska — means everyone needs to woo Manchin and, often enough, bend to his will, as in the case of the recent several-hundred-billion-dollar tax-and-climate legislation that he finally agreed to.

If you're the swing vote, you can play political hardball. It may seem undemocratic, but it's a natural byproduct of our majority-rules-based system.

Consider Chief Justice John G. Roberts Jr. For many years he held the swing vote on the Supreme Court. Because the nine-member court often was divided between a bloc of four liberals and a bloc of four conservatives, Roberts' willingness to switch from side to side gave him the pivotal final say — and an outsize influence similar to Manchin's in the Senate.

He had the power to demand changes in judicial opinions before he would award his vote to one side or the other. Merely by threatening to withhold his vote he could set the tone and direction of the court, pushing it cautiously to the right in a way he felt was not radical, chaotic or damaging to its reputation.

Before Roberts, the swing vote on the court was wielded by Anthony M. Kennedy, who used to insist: "The cases swing. I don't." Before that, Sandra Day O'Connor was the swing vote. (She was known as "Supreme Sandra" long before people started calling Manchin "Mr. President.")

But Roberts lost his power overnight when Amy Coney Barrett joined the court in 2020. Suddenly there was a solid majority of five conservatives, no matter how Roberts voted. They no longer needed him on their side to prevail. That's a big part of the reason Roe v. Wade was overturned last term.

Manchin could easily lose his extraordinary influence too after November's midterm elections, if the delicate balance in the Senate shifts even a little in either direction.

Interestingly, now that Manchin has chosen a side on the tax-and-climate package by cutting a deal with Senate Majority Leader Charles E. Schumer, D-N.Y., he's used up his "swing vote" power for the moment and effectively handed it off to Sinema. Her vote is also necessary for the legislation to pass, but she hasn't yet said whether she'll back it.

Swing voting is not just about single votes in institutions like the Senate and the Supreme Court. In fact, it gets the most attention in presidential elections, where it isn't the votes of individuals that matter but of blocs of voters. (One vote is pretty insignificant when 160 million people are casting ballots.)

An example of such a bloc would be "Reagan Democrats," of whom there were millions in 1980 and 1984, or suburban "soccer moms," who captured national attention in the mid-1990s. Or political independents.

Candidates spend endless time and countless dollars trying to identify potential swing voters so advertising and resources can be targeted to them and policies can be tailored to their liking. It's all about persuading the persuadable.

So what makes some people willing to shift their loyalties from one side to another while others stand firm?

The positive view is that they tend to be those who are willing to compromise — they're reasonable, not rigidly ideological, and they put principle ahead of party. No doubt that's how Manchin and Roberts and all those Reagan Democrats and soccer moms think of themselves. Swing voters emerge in times of polarization and can seem like moderate voices of reason.

The negative view is that they're wishy-washy, self-interested, unprincipled or uninformed.

In fact they can be any or none of those things.

And are swing voters a good thing or a bad thing? That depends mostly on your politics and theirs.

When Sen. John McCain, R-Ariz., defied his party in 2017 to cast a swing vote protecting President Obama's Affordable Care Act, Democrats applauded his courage and Republicans hissed. But when Manchin blocks the Democrats' agenda in 2022, Sen. Minority Leader Mitch McConnell, R-Ky., grins to himself and Democrats denounce Manchin as a traitor.

For my part, I'm utterly depressed by what Manchin has been doing. The Democrats could accomplish so much more if their majority were solid and reliable, without Manchin (and occasionally Sinema) weakening it by forcing compromises or saying no.

Furthermore, it is dangerous to have so much power concentrated in the hands of a man who has received more money from the fossil fuel industry than any other senator.

Those of us who hope to see the Democrats succeed can only console ourselves that after November, Manchin and Sinema might find themselves without their superpowers.

The problem is that it might be because the Democrats are more firmly in power — or because they've lost control of the Senate altogether.

Narcissist Nancy Pelosi and her hot pink pantsuit played a dangerous and reckless game in Taiwan.

Even if it’s part of a coordinated U.S.strategy to regain credibility on the world stage, the 82-year-old Pelosi and her ...Read More

U.S. House Speaker Nancy Pelosi has left Taiwan. Though the California Democrat didn’t stay long, less than 24 hours, the fallout from her visit plunges the Biden administration into a tricky — and arguably unnecessary...Read More

In the week since he reached a deal with Senate majority leader Chuck Schumer on the “Inflation Reduction Act,” Sen. Joe Manchin has been everywhere promoting it. One of the West Virginia Democrat’s top selling ...Read More