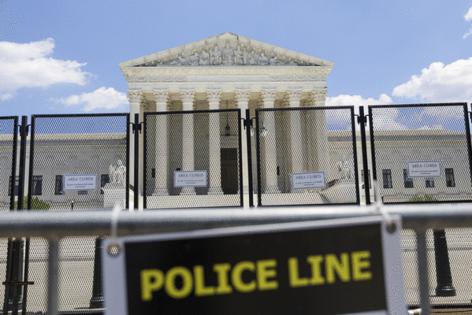 The decision also poses a broad and serious threat to the power of federal agencies to adopt regulations to protect public health and safety in other fields. By this ruling, the court’s conservatives have opened the door to challenges to countless regulations that apply to other industries.

The majority opinion, written by Chief Justice John Roberts, applied the “major questions doctrine” (a legal analysis used to determine if a federal agency has exceeded its authority) in a way that would strike down any regulation that has significant effects on the economy unless the government agency can “point to ‘clear congressional authorization’ for the power it claims.” This interpretation of the doctrine would give businesses a new way to attack other sensible regulations, even if they have been in place for years.

This case, West Virginia v. Environmental Protection Agency, involves the authority of the EPA to reduce greenhouse gas emissions from coal-fired and natural gas power plants. The Obama administration adopted an aggressive approach, known as the Clean Power Plan, to limit these emissions from coal-fired power plants, which are a major source of the pollution responsible for climate change. The Trump administration rescinded that plan and adopted its own Affordable Clean Energy Plan, which was far more permissive in allowing pollution.

The U.S. Court of Appeals for the District of Columbia Circuit ruled that the Trump administration failed to follow proper procedures in rescinding the Obama-era plan and in enacting its own approach. West Virginia and several coal companies appealed to the Supreme Court for review.

Under basic and well-established legal principles, the justices should have dismissed this case. The EPA has stated that it does not intend to revive either the Obama or the Trump plans. The Biden administration has said that it will announce its own, new approach. Given that there is no regulation to be enforced, there is no reason to have ruled on this case.

Of course, the conservative majority wasn’t concerned about hewing to the basic rules of adjudicating cases. Instead, it was intent on using this case to declare that the EPA had no ability to regulate greenhouse gas emissions from power plants because Congress had not been sufficiently specific in granting this power in the Clean Air Act.

It ignores the explicit statutory power of the EPA under the Clean Air Act to regulate power plants and to adopt regulations to deal with air pollution. It relies on the amorphous idea that Congress must be more specific in granting authority when there is a “major question,” but the court has never defined “major question” or what is sufficiently specific authorization to meet this requirement. And the court doesn’t offer any workable definitions in this case.

Instead, every industry and corporation unhappy with a regulation that might cut into its profits can now sue the government on the grounds that Congress did not provide specific authority for the rule. The court’s anti-regulatory approach rejects this reality: The smooth functioning of government requires that Congress be able to delegate to agencies broad authority to deal with urgent issues — such as climate change and a pandemic — without amending the laws at every instance.

The decision reflects an aspect of the Roberts court that has not gotten as much attention as it has overturned precedents on abortion, guns and religion. This is a court that is profoundly pro-business, even in the face of clear threats to public health and safety.

At a time when the planet is in peril from greenhouse gas emissions and climate change, the conservative justices using their power to block government action will have huge long-term effects. As Justice Elena Kagan said in her dissent, “The Court appoints itself — instead of Congress or the expert agency — the decisionmaker on climate policy.” Yet she notes, “Whatever else this Court may know about, it does not have a clue about how to address climate change.”

The court’s hubris and its decision to give businesses a way to challenge every sort of federal regulatory power will do this nation great damage.