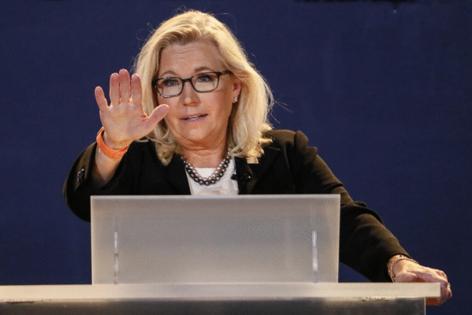 So when I first arrived at the Ronald Reagan Presidential Library in Simi Valley on Wednesday, the images of the 40th president — in cowboy garb or eyeball-to-eyeball with Gorbachev or loving up Nancy or putting a golf ball in the Oval Office — left me cold.

Reagan, in my view, was a dangerous Cold Warrior and archconservative whose distrust of government led him to unravel programs that had brought relief to millions of Americans.

But it’s a sign of how times change — and how egregiously the bar has been lowered — that as I made my way through the exhibits, I found my heart softening just a touch.

At least Reagan wasn’t a narcissistic, irrational, deceitful demagogue, like some others I could mention.

My reassessment wasn’t really all that surprising under the circumstances. I had driven out to the Reagan library from Los Angeles for a speech by Rep. Liz Cheney, the Wyoming Republican and outspoken, plainspoken celebrity vice chair of the House of Representatives’ Jan. 6 select committee who has risked her seat in Congress to take on Donald Trump and his enablers.

“Low polling Liz,” as Trump has called her, had come to the rocky hills of Simi Valley to spread her message that Trump — a member of her own political party — has put American democracy in existential danger; that he has “gone to war with the rule of law”; that Republicans can’t be loyal both to him and to the Constitution. She said the country “stands at the edge of an abyss,” and that everybody must choose sides.

“We are confronting a domestic threat that we have never faced before,” Cheney told the crowd of almost 700 people. “And that is a former president who is attempting to unravel the foundations of our constitutional republic. And he is aided by Republican leaders and elected officials who have made themselves willing hostages to this dangerous and irrational man.”

By comparison, Reagan — for all his flaws — seems like a statesman.

As for Cheney, my policy disagreements with her are as deep and as broad as my disagreements with Reagan ever were, from her hawkish foreign policy views to her reverence for small government. She has defended the use of torture. She praised the Supreme Court’s decision overruling Roe v. Wade. For a while, she didn’t even support her own sister’s right to marry another woman. (She’s since changed her mind.)

But at the moment, all that seems beside the point. These days, she’s standing up for what she believes, and reminding Americans and people around the world what it means to be a person of principle. It takes courage to challenge your political allies and make common cause with your adversaries.

As a result of her lonely anti-Trump battle, Cheney was stripped of her leadership position in the House by her GOP colleagues. Now she faces an even greater threat: an Aug. 16 primary challenge from a Trump-supported candidate at home in Wyoming. Some polls suggest she could be running behind by as much as 30 percentage points.

Cheney is not a gifted or hyper-articulate speaker. She’s no-nonsense and matter of fact; her words derive their strength more from their bluntness than from their eloquence.

Of course she spoke at the library about the findings of the Jan. 6 committee. She said that Trump knew he had lost a fair election. He nevertheless summoned a dangerous mob to Washington. He knew members of the mob were armed and dangerous, yet he directed them to march on the Capitol to prevent the certification of electoral votes. And he not only didn’t try to stop the melee, he incited further violence.

Cheney also talked about her own “conservative Republican” beliefs and took some brief shots at Biden administration economic and immigration policies. She talked about God and the centrality of the family.

I was very curious who would attend an event for a renegade Republican at a GOP stronghold. The room was full. The audience was clearly supportive. Cheney received several standing ovations, including when she first walked in.

There were Democrats in the crowd — almost certainly more than usually show up for Reagan library events. Some felt a touch out of place. “I’m here to say thank you to her for what she’s doing,” said Alan LaFace of Glendale, a Democratic voter.

There were also self-described independents, curious to see Cheney in person.

And of course, Republicans — disaffected ones, mostly, unhappy with Trump’s ascendancy. One couple described themselves as Rockefeller Republicans. Another person said he was a Reagan Republican. A woman from Camarillo told me she had always voted Republican until 2020, when she voted for Biden. “I have a great deal of respect for Liz Cheney,” she said.

A handful of demonstrators along the road outside the library entrance chanted that Cheney was a RINO — a Republican In Name Only — and that those who attended the speech should be ashamed. They said that the Jan. 6 committee was a one-sided sham.

But inside the library, she was among supporters. “She’s put everything on the line,” said Greg Wyatt of Big Bear City.

I have no idea whether Cheney has really risked everything or whether she’s already gearing up for a next ambitious step. Plenty of audience members said they saw her as a potential future Republican presidential candidate, presumably representing the non-insane wing of the Republican Party.

For my part, I would never in a million years vote for her. She’d be terrible for the country. But I admire her nevertheless, and I’d always know, at least, that she was a person of principle.

WASHINGTON — One year ago, as President Joe Biden was withdrawing the last American troops from Afghanistan, the Taliban swept into Kabul and abruptly brought a 20-year, $2.3 trillion U.S. war to an ignominious end.

The past three months have seen mass shootings of schoolchildren in Uvalde, Texas, and July Fourth celebrants in Highland Park, Illinois. Cries for greater gun control to stop such avoidable, premature deaths grow after ...Read More

Bad gun laws have claimed yet another victim, but not the kind you might be thinking of. This year’s Music Midtown Festival in Atlanta was recently canceled because the organizers believed Georgia law did not allow them ...Read More

If you search the internet for the term “raid,” two results precede all others: The second one refers to the popular bug-killing product Raid, which has been almost synonymous with the term “insecticide” since 1956...Read More