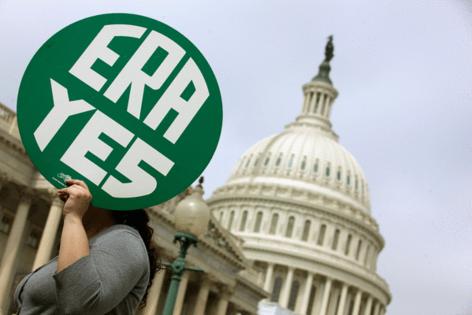 When Roe v. Wade was decided in 1973, it was rooted in rights that flow from privacy — not equality. As the country has now seen in the leaked Supreme Court draft ruling, that right to privacy is about to be demolished.

Justice Samuel A. Alito Jr. bemoans in the draft opinion that Roe “was remarkably loose in its treatment of the constitutional text,” basing the right to abortion on the right to privacy when neither is “mentioned” in the Constitution. While we can’t change the composition of the court poised to overturn Roe, we can change the text they are charged with interpreting. It’s time to finalize the Equal Rights Amendment and enshrine gender equality.

The right to privacy was first articulated in a 1965 Supreme Court case, Griswold v. Connecticut, concerning the state’s decades-old law banning contraception. Lawyers defending married couples’ use of contraceptives argued that the right to reproductive health care existed under equality in the Constitution.

But, in part because there was no explicit equality guarantee in the Constitution, Justice William O. Douglas instead cobbled together guarantees within the Bill of Rights (the First, Third, Fourth and Ninth Amendments). The court ruled to permit contraception, affirming that while privacy was not an explicit constitutional guarantee, it is found in the penumbras, or shadows, of other existing rights.

Less than a decade later, in 1972, the ERA passed in Congress with little opposition from either party. The House approved the ERA 354 to 23, and just eight senators voted against it. But it had still not been ratified by 1973 when Roe came down. With the Constitution still lacking an explicit right to equality, the Roe decision is a technical, medicalized one. It hyperfocuses on a pregnant person’s body and pregnancy timing rather than a right to equal citizenship and freedom from discrimination on the basis of sex. Many, including Ruth Bader Ginsburg, have criticized the decision to base the right to abortion on privacy, not equality.

The ERA barreled through 30 of the 38 necessary state ratifications in the first year after its passage, and ratification seemed inevitable. But after the Roe decision, many conservatives channeled their opposition to abortion toward the ERA, launching a wider fight against women’s rights. Phyllis Schlafly’s STOP ERA movement was born.

As the religious right’s political influence began to grow, this group of far-right activists chose abortion as a wedge issue to activate their base — but zeroed in on opposition to the ERA as the first concrete campaign to flex their newfound political power. Catholics, evangelicals and Mormons banded together against the amendment. In 1982, when the extended time limit on ratifying the ERA expired, STOP ERA declared victory.

Many feminists gave up on the fight, falsely thinking at least access to abortion was secure. However, in recent years and with increasing threats to our basic liberties, the ERA has found new life. The amendment stands now as the most straightforward solution to current constitutional woes.

The ERA has already met all the constitutional requirements for ratification. In 2020, Virginia became the 38th and final state needed to satisfy the Constitution’s Article 5, which governs the amendment process. With the amendment having passed in Congress by more than the two-thirds vote required, and being ratified by enough states, respected constitutional legal scholars agree that the ERA is now the 28th Amendment. The only step left required by statute says the national archivist has to certify the additional ratifications and publish the amendment in the Federal Register. We are literally one signature away from changing the Constitution.

Though two years have passed since Virginia’s ratification, the archivist has refused to act, saying a green light is needed from the White House. Yet Harvard professor Laurence Tribe wrote to Congress in March that his “conclusion as a constitutional scholar is that the ERA is currently a valid part of the United States Constitution,” that Congress should recognize it as such and that “even if Congress takes no such action the Archivist should publish it as the Twenty-Eighth Amendment.”

The states that have ratified in the modern era, Nevada, Illinois and Virginia, filed suit against the archivist in 2020 to compel him to recognize their ratifications. Though the states lost in federal district court, they have appealed to the D.C. Circuit, where the case now stands. Depending on the outcome, the case could end up before the Supreme Court. But a strict reading of Article 5 makes amending the Constitution a political question not for the courts to resolve.

Finalizing the ERA is the clearest path forward for abortion rights. The Senate, though generally an unproductive quagmire of late, should have at least 52 yes votes on a House-approved resolution eliminating the original ratification deadline placed in the proposing clause of the ERA. That would help remove any lingering doubt opponents try to drum up about its legitimacy. Biden should use a majority vote on the ERA, which has bipartisan co-sponsorship, as evidence that Congress supports the archivist publishing the ERA, once and for all.

ERA opponents frequently decry its enormous potential to protect reproductive rights and freedom. They’re not wrong. New Mexico’s state Supreme Court struck down a law (akin to the federal Hyde Amendment) that prohibited government-funded coverage of abortion, basing its ruling on the state’s ERA. Other states have had similar successes under their state-level ERAs — a good sign for future abortion litigation on the federal level with the ERA in place.

In addition to completely changing the landscape for the courts, a federal ERA would also provide a constitutional hook for Congress to pass laws that not only “codify Roe” but also move beyond the limited privacy framework to support the rights of women and other marginalized genders nationwide.

With five dedicated anti-abortion “originalists” on the Supreme Court, the only thing we can do to protect abortion rights permanently is to change the constitutional text. Even originalists have to concede that Article 5 exists, creating a way to edit the Constitution. If we at long last finalize the ERA, we can achieve abortion access based on equal citizenship.