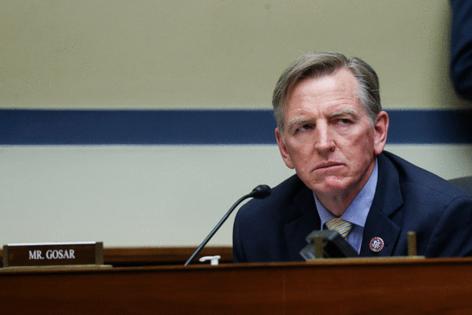 Just in time for Veterans Day, Rep. Paul Gosar discovered his inner warrior. Armed with an anime sword and less than impressive software, the Arizona Republican released to the world a 90-second window into his soul: his fantasy of being a flying far-right superhero who murders woke libs such as his colleague, Democratic Rep. Alexandria Ocasio-Cortez of New York, and tries to do the same to President Joe Biden.

If a high schooler shared a clip of themselves decapitating a fellow student, the principal, parents and school district would take notice. When a Republican member of Congress does so, the answer by party leadership is that libs/lamestream media/cancel culture propagandists can’t take a joke. While there certainly are many of us who find Gosar’s behavior vile and Republican leadership’s collective shoulder-shrug disappointing, I’m guessing from a fundraising point of view coupled with the need to demonstrate fierceness to primary voters, the 90 seconds of fantasized bloodshed was highly profitable.

Vilifying your political opponent is neither new nor practiced by one party alone, but the ease by which calls for action can be disseminated via social media heightens a message’s impact and brings with it the added responsibility for grown-ups to act as such. I don’t think Gosar has a sword in his office and is just waiting for the right opportunity to turn fantasy into action. I also don’t think he will enter the Capitol and cause bloody carnage. However, on Jan. 6, hundreds of our fellow Americans did just that, spurred on by years of ever-increasing violent political messaging by office holders and seekers alike.

When I first saw Gosar’s fantasy clip, I was reminded of Joseph Welch. You may not know who he is, but you’ll certainly know what he said and who he said it to. During a fierce exchange with Sen. Joseph McCarthy on June 9, 1954, Welch just couldn’t take the senator’s outrageous and unhinged conspiracy theories any longer: “Until this moment, senator, I think I never really gauged your cruelty or your recklessness. Have you no sense of decency, sir, at long last?” If ever given the opportunity, that’s what I envision myself saying to Paul Gosar: “You walk the same marbled floors as Abraham Lincoln, John McCain and John Lewis. Where’s your sense of decency?”

Shouldn’t simply being a “decent” human being be the threshold when it comes to choosing our elected representatives? Can’t we expect that, at a minimum, public officials will act with common decency? That’s my fantasy, and it doesn’t involve a sword. However, upon further reflection, it occurred to me that Gosar’s video is simply a reflection of the system that he is stuck with. Asking him to respect an ultra-liberal colleague is like asking a linebacker to be kind to the quarterback.

Gosar represents a solidly Republican district and has been elected every two years with about 70 percent of the vote. Thanks to gerrymandering, the only contest he has to worry about is the Republican primary. Like most other districts in America, if you win your primary, you’re pretty much guaranteed the seat, and that’s true of state maps drawn by Democrats as well.

There are about 800,000 people living in Gosar’s district, and about 80,000 of them voted for him in the Republican primary. That means that roughly 10 percent of the people in the district bothered to show up for a primary election. They did their civic duty. They made a point of casting a vote and being part of the process. They got in their cars, took a couple of minutes out of their busy schedules, and showed up, whereas most others couldn’t be bothered. Gosar knows full well that it is those 80,000 voters who make all the difference; his message needs to resonate with them and no one else. And in their estimation, common decency is not what they’re looking for in their representative.

Congress is a reflection of America and its people. Right now, that reflection is one of division, hyper-partisanship, and anger. It is irrational to expect common decency from a candidate for office, when common decency is political suicide and working across the aisle is held against you. It isn’t the member of Congress who is letting us down, it is the voter who thinks primaries are unimportant and performing your civic duty is too much work. At perilous times such as these, being a silent observer rather than an engaged citizen is indecent.

If Americans of all political stripes don’t stand up and act by electing candidates who at a minimum meet the “decent human being” test, the current climate will only get worse and worse. In order to effectuate change, voters must give candidates for office an incentive. Right now, with too many gerrymandered districts that have elevated primaries to the deciding contest, the incentive for many candidates is to perpetuate the tribal and belligerent narrative. And the incentive for party leadership is to punish members who voted for legislation championed by the other party and rally around a member whom you’d rather not have as your next-door neighbor. Americans who have given up on representative democracy are to blame, and that’s the ultimate indecency.

Pete Weichlein is the CEO of FMC: The Former Members of Congress Association.