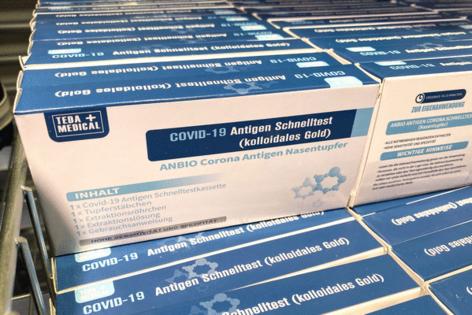 When the travel ban was finally lifted this month, Brits visiting the U.S. got a shock. Not only were rapid COVID tests hard to find; prices were at rip-off levels. A survey conducted by the Independent newspaper found an antigen test at Orlando International Airport cost $65; it was $75 in San Francisco and $100 in a Washington, D.C., travel clinic.

By contrast, antigen home test kits are provided free of charge from Britain’s National Health Service and come in a box of seven tests that can be picked up at local pharmacies (airport tests are around 35 pounds or $46.88). The tests are useful in areas where the virus is surging. Some schools make antigen tests mandatory before a parent-teacher meeting; they can be required for a hospital visit or for entering a nursing home.

And they provide a measure of psychological comfort. If you’re feeling a little off, an antigen test can help rule out the prospect that you might infect people around you.

Why couldn’t the U.S. make it as easy and cheap to do a rapid COVID test? It’s a problem the administration of President Joe Biden must now solve for two reasons. First, Biden’s new “vaccinate or test” rules — currently suspended pending a legal challenge — depend on having enough tests for unvaccinated workers in firms of over 100 employees to test regularly.

Perhaps more importantly, the COVID wonder drugs coming online — including therapies from both Pfizer and Merck — require people having the ability to test themselves quickly and repeatedly so the drugs can be administered soon after infection.

Biden may have campaigned on a promise to expand testing but his administration focused heavily on vaccinations and has only belatedly woke up to the problem of testing shortages. The administration is now throwing $3 billion to try to get up to 200 million at home tests per month. That comes too late to meet demand ahead of this week’s Thanksgiving holidays and possibly even by the end of the year.

The U.K. threw the kitchen sink at its rapid testing policy much earlier. That was controversial, in part because of the benefit it brought to a previously obscure company called Innova Medical Group, whose Chinese owner managed to secure an estimated $2.7 billion of government contracts in large part because it had enough supply to deliver quickly. Critics of the Innova tests and antigen tests more generally charge that they are far too inaccurate to help with infection control.

A fairer criticism was that the government did a poor job of explaining their use, leading to a backlash when people learned they weren’t as accurate as the polymerase chain reaction (PCR) tests, often referred to as the “gold standard” in testing.

The beef against rapid antigen testing is that their “sensitivity” level — that is, their ability to correctly identify someone with the virus — is much lower than PCR tests. In a pilot study in the city of Liverpool, rapid tests missed 30% of cases where the viral load was high and half of all positive cases detected by PCR tests. And yet as the U.K. and other European countries that rely on these tests have come to recognize, an imperfect test can still play a vital role in cutting transmission so long as it catches the most infectious cases.

PCR tests are great — but they are also expensive, must be processed in a lab and involve a turnaround time of anywhere from one to a few days. The beauty of antigen tests is that they take minutes to assemble, can be self-administered and the results appear in under 30 minutes.

It’s an argument that Harvard immunologist Michael Mina has been making for some time: From a public health perspective, it’s less important for a test be highly accurate in detecting the presence of virus so long as its highly accurate in identifying those who are most likely to transmit it, which the antigen tests are good at. The Liverpool pilot, a later study by the University of Liverpool showed, led to a 21% reduction in cases up to mid-December last year with an 18% increase in case detection versus the control areas.

The sensitivity of PCR tests isn’t always an advantage either. Someone with COVID-19 may be infectious for three to seven days, but a PCR test can deliver a positive result a month or more after infection. Antigen tests are highly unlikely to deliver a false positive, keeping people from work unnecessarily. And repeat testing will provide a measure of infectiousness, reducing the period of isolation.

A combination of regulatory bottlenecks, muddled messaging and now rising global demand has left the U.S. furiously playing catch-up with no easy solution in sight. Because antigen tests are classified as medical devices, the FDA measures candidates against the gold-standard PCR test. That high bar has led to a painfully slow and often inscrutable approval process, as an investigation by ProPublica this month chronicles; and too little supply.

It has also kept prices far too high. The BinaxNOW test, the cheapest of those available, costs $20 on Amazon.com for a pack of two — only they were unavailable as of this writing. It’s $24 at CVS Pharmacy, Rite Aid and Walgreens but is sold out in multiple locations. Ellume’s version costs nearly $39 but was out of stock at various retailers.

The FDA recently simplified its cumbersome authorization process for test-makers and granted a half dozen new emergency use authorizations for home-use antigen tests. But because the standards remain the same, it’s not clear even the additional approvals will fix the supply shortage. (Mina makes a strong case that the Biden administration should designate antigen testing a public health tool rather than regulated as a medical device, a change in classification that would take it out of FDA hands and leave standards and approvals to the Centers for Disease Control.)

It would be better, of course, if everyone was fully vaccinated and boosted. But COVID hasn’t been vanquished yet, and lockdowns are a policy option no one wants to contemplate again, as recent protests in Europe show. In the meantime, making a rapid test as commonplace as a bottle of aspirin in the medicine cabinet will give people a greater sense of control and help bring infection rates down.

Therese Raphael is a columnist for Bloomberg Opinion. She was editorial page editor of the Wall Street Journal Europe.