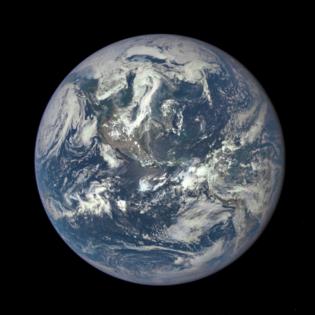 The Clark Fork River drains much of western Montana, bringing water from the Crown of the Continent to the Columbia River and the Pacific Ocean. My daily commute via bicycle crosses the Clark Fork most days and has allowed me to discern a rhythm and tempo in how the seasons come and go — a composition of daily weatherlike notes in a musical score that is the climate of Missoula, Montana.

Our global climate is changing. This is not ambiguous or uncertain. It is our reality. And with it, the need to communicate the importance of climate in our daily lives has never been more acute. Unfortunately, the ability of scientists to describe changes in the climate system remains primitive.

We present climate as a caricature of its true self. We use average temperature and precipitation as a thumbnail sketch for describing complex systems. We talk about a future that is 2 degrees Celsius warmer than today. We come armed with analysis, data, sophisticated graphs and maps — as if this will resonate with the wider public.

I liken the challenge to describing a song to someone who has never heard it: “It is in the key of C and has 4/4 timing.” The description is factually accurate but fails to inform because it lacks context, emotion and the framing that a listener brings.

Public perceptions of climate change make it clear that we need to improve how we communicate about these issues. For example, in a 2020 survey more than 70% of Americans agreed that climate change is happening and that it will harm future generations. Yet only 43% thought climate change would harm them personally.

Most people cannot contextualize how climate change will affect their lives despite research that suggests that understanding climate change on a local level is critical for public engagement on the subject. Instead, the dominant mode of communication is a constant barrage of negative headlines about receding glaciers, burning landscapes and extreme storms in distant places. Research shows that such negativity may be driving disengagement in climate action.

How can we frame climate change in a way that people can relate it to where they live and play? When describing complex issues, people have long relied on the use of analogy. As Winston Churchill put it, “Apt analogies are among the most formidable weapons of the rhetorician.” This applies equally in the sciences as the humanities. “What will the climate of my future look like?” This question has all the hallmarks of a problem that can benefit from analogy. Because climate is complex, difficult to describe and requires the context and experience that come with living in a place. This is also a question that is relevant to all of humanity as we try to prepare for the future.

An apt analogy for a future climate is not a rhetorical flourish. It is a place. Scientists call these locations “climate analogs,” present-day places that share similar climates to those projected for another location in the future. Climate analogs contextualize climate change by answering a simple question: “Where can I find the climate of my future, today?”

For residents of Los Angeles, it’s the southern tip of the Baja California Peninsula near Cabo San Lucas, Mexico. For those who live in Washington, D.C., it’s near Louisburg, North Carolina.

Those comparisons were made using an interactive online tool, the Analog Atlas, that I helped develop as part of a team of researchers in an effort to improve how we communicate about climate — and to help users contextualize climate change effects. The atlas allows users to pick any location on land on the globe, then identifies the present-day site that best matches the location’s future climate. Users can select two warming scenarios — a global average temperature increase of 2 degrees Celsius, roughly expected to occur around the year 2050, or a more dire late-century increase of 4 degrees Celsius. The climate analog can be explored using maps, satellite images and street views.

What will the climate of Missoula feel like in a warmer world? Check out Lewiston, Idaho. Missoula sits in a valley in the Northern Rockies surrounded by pine forest. Our mornings are cool, our summers are relatively mild. Lewiston is nearly 150 miles to the southwest on the edge of the Palouse prairie as it transitions into the mountains. Lewiston suggests Missoula will have warmer nights, hotter summers, less snow, fewer trees and longer fire seasons.

Lewiston is also a model for how Missoula can prepare for a changing climate. What is Lewiston’s per capita energy and water use? What crops do they grow regionally? What pests and weeds do they contend with? Of course, Lewiston is not a perfect analog. All analogies are imperfect, but they can give us insights.

As a scientist, I have come to realize that complexity and uncertainty challenge us to develop novel ways of communicating. I am not alone in this realization. A growing body of research emphasizes that scientific beliefs are linked to people’s identity, and science communication has more to do with how we present information than the evidence itself.

Twenty years ago I was oblivious to this reality and content with describing my work in the limited parlance of science. But now as a father concerned about the legacy we leave our children, this approach seems inadequate. As scientists, we need to illuminate how changes in our climate will affect the daily rhythms of people’s lives so they can prepare for an uncertain future. We need to appeal to emotion and a person’s sense of community and place. The cost of inaction, apathy and ignorance is simply too high to ignore.