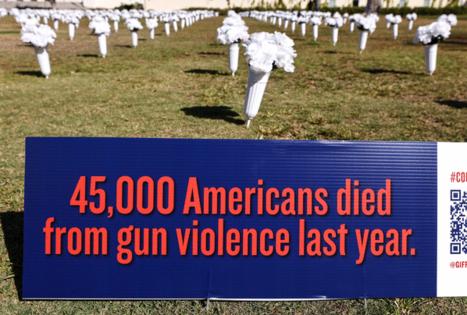 October is Domestic Violence Awareness Month, and this year’s commemoration comes at a time when researchers are reporting tragic increases in rates of domestic violence — a “pandemic within a pandemic” — across the country.

At the same time, the United States is experiencing a sharp increase in gun violence, largely driven by gun homicides. And almost every day we’re discovering troubling new information about the connection between domestic violence and gun violence.

We understand, both through research and intuition, that guns play a central role in domestic violence. Researchers at the University of Pennsylvania found that nearly 1 million women alive today in the United States have been either shot or shot at by an abusive partner; and around 4.5 million women have been threatened with a gun at some point in their lives.

More than half of all women killed by an abusive partner were killed with a gun. In total, more than one in four homicides in the U.S. are related to domestic violence.

Though anyone can experience domestic violence, women are victims of domestic gun violence at rates far exceeding those of men. Black, Indigenous and Alaskan Native women are disproportionately harmed by intimate partner homicide. So are LGBTQ+ people.

A May 2021 study that I authored with colleagues from the Johns Hopkins School of Public Health further explores the relationship between domestic violence and gun violence. The findings were alarming, even among our experienced team.

Nearly six in 10 mass shootings (defined in our paper as incidents with four or more fatalities by gunfire excluding the perpetrator) between 2014 and 2019 were related to domestic violence. And in nearly seven in 10 cases, the perpetrator shot his or her spouse, partner, or other family members, and/or had a history of domestic abuse.

Additionally, we urge members of the media to expand their coverage beyond “public” mass shootings. As we write in our paper, focusing only on the most “public” incidents of gun violence “may lead to an assumption that most mass shootings occur at random, leading to missed opportunities for intervention, either through policies or programs, that could help reduce the burden of mass shootings.”

Ultimately, both domestic violence prevention and gun violence prevention must be addressed with policy change, increased education and improved implementation of existing laws. Among other things, we must prohibit people convicted of violent misdemeanors or subject to domestic violence protective orders from purchasing or possessing guns; close the dating partner loophole to ensure abusive dating partners are subject to domestic violence-related firearm laws; and make sure these laws are implemented swiftly and equitably by prioritizing the removal of guns from domestic abusers.

We have the power to prevent untold tragedies by recognizing the groups most at-risk for domestic violence, specifically Black and brown women, and by passing and implementing restrictions on firearm access for individuals with a history of domestic violence. As we wait, lives are on the line.

Lisa Geller is the state affairs manager at the Educational Fund to Stop Gun Violence. This column was produced for The Progressive magazine and distributed by Tribune News Service.

In hearing the guilty verdicts of those who murdered Ahmaud Arbery, I felt a sense of relief that justice was done in a case where the evidence was so clear that the defendants were guilty. Yet that reaction, which I am ...Read More

Chicago journalist Ben Joravsky called me a “son of Chicago,” and I am. Inside and out. A love for this city is part of my heritage. My father, Mike Royko, served as a voice for Chicagoans through his newspaper column ...Read More

At least we’re learning. Remember when the early reaction to the outbreak of a deadly virus in Wuhan was to discourage people from changing their travel plans?

While Senate confirmation hearings often get heated, it’s rare these days to see legislators out-and-out accuse administration nominees of being secret Communists. In fact, it’s been more than 60 years since that sort ...Read More

When parents warn their children about drug exposure, they tell them tales of the danger of peer pressure from teenagers in murky basements or from the dark corners of the bleachers during a high school football game. ...Read More