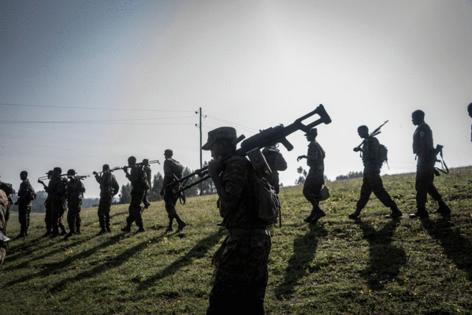 Outsiders often view Africa as one large zone of war, poverty and tragedy. It’s not, but armed conflict is ongoing today in about a dozen of Africa’s 54 countries. While all of these conflicts are tragic, some are more relevant to the outside world than others.

Ethiopia’s conflict is one of them. It began in November 2020, and the scale of suffering is massive. With Ethiopia’s size, geography and composition, the conflict could increase exponentially, with potential implications on everything from the spread of terrorism to disrupting key shipping lanes.

But that doesn’t mean we should look away. The U.S. government has condemned the violence and called for peace, but that won’t be enough. An active diplomatic strategy engaging other key players, including the African Union and European Union, would be a low-cost way to avoid the threat in Ethiopia becoming a transnational one. It won’t be easy, but as some seasoned experts have noted, if we invest heavily and early to secure a comprehensive diplomatic settlement, we could avoid the far higher costs of the fallout.

Ethiopia is the continent’s second most populous country and the 12th most populous in the world. It is a diverse federation of states divided largely by ethnicity and, until recently, was the glue holding together an unstable but consequential region.

To get a sense of how destructive this conflict could become, consider Syria. After 10 years, the civil war in Syria is only beginning to wind down to an unsatisfactory conclusion. What began with violent repression of anti-government protests in 2011 soon became a widespread proxy war fought by regional and global players. More than 500,000 people are dead or missing with at least 116,000 documented civilian deaths. More than half of Syria’s population have fled their homes.

The refugee crisis not only destabilized the region—with Lebanon, Jordan, and Turkey bearing the brunt— but also became a flashpoint in European Union politics, fueling destructive far-right nationalism across the continent.

Ethiopia’s population is 115 million — more than five times that of prewar Syria. The war was a violent escalation of a political conflict between the government and the Tigray People’s Liberation Front (TPLF), a well-armed political party representing a small ethnic minority in the Tigray region. The government’s scorched-earth campaign began early.

There are no obvious good guys in this story. The TPLF had ruled the country oppressively for nearly three decades before anti-government protests forced them from power and Abiy Ahmed became the country’s first prime minister from the country’s largest ethnic group, in 2018. Abiy was heralded as a reformer but soon opted for the oppressive ways of his predecessors, arresting critics and treating political opponents as traitors. International partners, including the U.S., were slow to condemn the shift, possibly overcompensating for years of enthusiastic support for the prior oppressive regime.

In this war, however, the government is inflicting the bulk of violence against civilians. It’s severely restricted humanitarian assistance and cut off electricity, banking and communications to the Tigray region. The government launched airstrikes on Mekele, the capital of Tigray, as recently as Oct. 20. Abiy’s recent move to turn civilians into combatants and widespread use of hate speech are deepening the conflict, risking the spread of violence to further communities and even raising fears of genocide.

Why should this matter to the us? Like Syria, the conflict in Ethiopia would undoubtedly attract proxy war, drawing in players from well beyond the region eager to take advantage of the chaos. Regional conflict could disrupt shipping lanes and security off the coast of the Horn of Africa, further impeding global supply chains already stretched to the brink. Ethiopia’s fall would dramatically undermine the multilateral battle against terrorist groups in the region, providing them fertile recruiting ground and additional ungoverned spaces from which to operate. The flood of refugees would cause chaos in the Gulf, Europe and elsewhere in Africa.

If the potential knock-on effects of the conflict don’t alarm you, consider the scale of suffering we’ll see. Already, tens of thousands are estimated to have died, and both rape and hunger are being used as weapons of war. Famine in Ethiopia in the 1980s killed one million people. Famine today is again looming and appears to be the government’s design.

There is no easy fix to ethnic conflict between well-armed groups, but we have effective nonmilitary leverage and options in our toolbox and should use them. In the wake of failure in Afghanistan, it’s time we invested more in collective international diplomatic action instead of responding to all security threats with tools of war.

Last month, President Joe Biden assured the UN General Assembly that the United States was opening a new era of “relentless diplomacy.” Ethiopia seems like a good place to test it out.

Elizabeth Shackelford is a senior fellow on U.S. foreign policy with the Chicago Council on Global Affairs. She was previously a U.S. diplomat and is author of “The Dissent Channel: American Diplomacy in a Dishonest Age.”