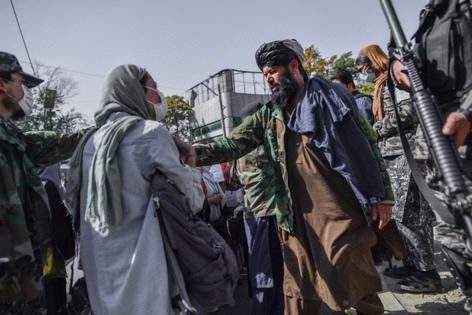 Before the U.S. exit from Kabul, we heard fine White House words about saving Afghan allies who helped U.S. troops.

Yet the majority of the 18,000 Afghans applicants for special immigrant visas (known as SIVs) which were designated by Congress for translators and other military helpers, were left behind during the chaotic evacuation. The State Department has admitted to this.

The Taliban has lists of those who remain and is out to imprison or kill them.

Yet the only rescue efforts underway for those in the SIV queue are being organized by private U.S. veterans’ groups and humanitarian organizations. These groups have to raise extensive funds for safe houses and for charter flights from Afghanistan to Arab Gulf countries. They get no financial help from the U.S. government.

“We’re subcontracting out our policy to private Americans and expecting them to pay for evacuations,” says former U.S. ambassador to Afghanistan Ronald Neumann, “while sending Afghans into a situation where we have no clear policy as to whom we will admit.”

It’s long past time for the Biden administration to show some loyalty to Afghans who showed loyalty to us.

They include people like N, whom I last spoke to in Kabul via WhatsApp, as he hid in a cold, rented room with no electricity, terrified because he’d heard that the Taliban was conducting house-to-house searches. (Because of fears for N’s safety, I will only refer to him by the first initial of his given name.) An IT specialist, he worked with U.S. forces in Kandahar, while his wife, a women’s rights activist, and father, a lawyer, worked with U.S. military contractors in Kabul.

N was caught outside and badly beaten by Taliban who knew his and his father’s name, and told him he would pay for helping U.S. forces. He barely escaped. I saw pictures of his broken nose and battered face.

But N, along with his wife and father, are in the early to middle stages of the SIV application process, which is so convoluted that it can take years to complete. With the U.S. embassy in Kabul shuttered, there is no way to finish the application. Nor is it possible for SIV applicants to get to a U.S. embassy in a neighboring country when their names are on a Taliban list at the border.

So N and his family, including four children, are in separate hiding places, uncertain how they will survive.

State Department spokesman Ned Price has claimed the department aims to “lend a degree of automaticity” to private charter flight operations, to facilitate the departure of “Americans, lawful permanent residents, and others to whom we have a special commitment from Afghanistan.”

Say what? Price has also said there won’t be U.S. military evacuation flights, and there is no U.S. government offer to pay for private charters. Nor — in a deadly Catch-22 — is there any indication the Biden team will accept thousands of SIV applicants who haven’t finished the visa process, which is impossible now that the U.S. embassy in Kabul is shut.

This leaves the burden on volunteer groups like the SOAA (the Special Operators Association of America). Its director, special forces vet Daniel Elkins says they are trying “to help the Afghan brothers and sisters who fought alongside us,” by providing safe houses and helping them find a pipeline to safety.

Or Task Force Argo, made up of military veterans and nonprofit leaders. Organized by Jesse Jensen, a retired U.S. Army Ranger, and Iowa State Sen. Zach Nunn, also a veteran - along with a group of ex-military buddies - Task Force Argo has moved 2,120 people out on charters including 61 U.S. citizens.

“We continue to operate flights for those who served with or supported U.S. forces,” Jensen told me. But he’d like “a more robust relationship with the State Department.”

“We are still waiting,” he said.

That means clear State Department guidelines are needed on how to channel SIV applicants, and Afghan military officer allies, into the pipeline for admission to the United States - as well as details on whom the United States is willing to admit.

Jensen would also like to see State working with NATO allies to facilitate third-country locations where SIV applicants would be safe while they are vetted. “We need countries to move them to,” he adds, “if there is no approval for them to go to the USA.”

As for who should pay for the charters: “That seems like the role of the U.S. government to honor promises made to people who served to protect our troops and worked for democracy. I look forward to the U.S. taking a more active role.”

But the frustration was evident in Jensen’s voice, as well as that of Congressman Seth Moulton, an Iraq veteran and a leading voice among the bipartisan group of U.S. legislators who have pressed for getting SIV applicants out.

“Myself and other vets in Congress have not been briefed on any plan for getting people out who helped us,” he told me. “So far as I know, there is no plan.”

He was pleased at the appointment of the skilled career ambassador A. Elizabeth Jones, who recently returned from retirement to coordinate Afghan relocation efforts. “But she has to be given authority to act and get things done.”

The bottom line: The chaotic exodus from Afghanistan left the bulk of translators and those who helped the U.S. military in dangerous limbo. It should not be left mostly to military veterans to fund and rescue those who fought alongside us. They should get maximum State Dept. assistance and funding.

“I am feeling scared, disappointed, helpless, and broken,” N told me via WhatsApp on Thursday. Is the U.S. government ready to let him and thousands of SIV applicants be jailed or killed?

This is one of a series of interviews by Bloomberg Opinion columnists on how to solve the world’s most pressing policy challenges. It has been edited for length and clarity.

Justin Fox: You are economists who happen to ...Read More

When I first started covering conflict zones many years ago, I resolved never to bother with the Troubles in Northern Ireland.

I had grown up in Boston, where every bar in Irish neighborhoods had a box for donations to ...Read More

Pretty much anyone who has had the privilege of standing next to one of the biggest, oldest giant sequoia trees understands the rush of awe. Here is a tree so burly, cars could — and once did — drive through a tunnel ...Read More

Ahmaud Arbery was a flesh-and-blood 25-year-old when he laced up his shoes for what would be his final run on his last day on Earth on Feb. 23, 2020.

In just a few short hours, he would be chased down and murdered by a ...Read More