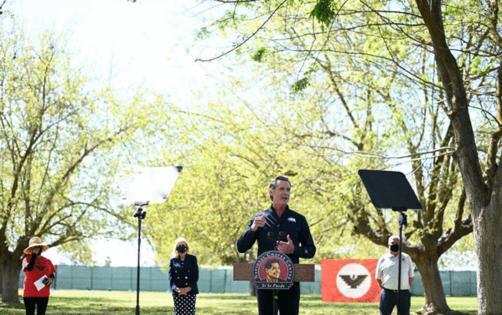 It shouldn't have been surprising because Gov. Gavin Newsom's elitist attitude toward Mexican farm workers is emblematic of his privileged class. But unless one understands the nature of wealthy entitlement in California, it probably seemed surprising that Newsom vetoed a bill that would have enhanced organizing rights for farm workers by allowing them to do what other union workers do — vote by mail in union elections.

The veto was particularly vile because it came on Sept. 23, the first day of a planned march by members of the United Farm Workers from Tulare County to Sacramento. The march was meant to raise awareness about farm workers' lack of fundamental rights that other, non-Mexican workers in California do enjoy. Instead, it became a kind of wake, an angry one at which the plight of farm workers gained another layer of exploitation courtesy of Newsom.

On top of that, the UFW supported Newsom during the recall. Union leaders kept quiet about Assembly Bill 616, the bill that would have enhanced farm worker voting rights, ahead of the Sept. 14 election out of fear of harming Newsom's standing with Latino voters. The UFW reached out to me weeks before the recall to talk about the bill, and I was ready to write about it then, but they wanted me to wait out of respect for Newsom.

Latinos supported Newsom in the recall election. Then, when it was clear that he was politically safe, he made quick work of farm worker rights.

Newsom's veto was not just a slap in the face to the union that represents Mexican farm workers for the support and deference they had shown him. It was also an act of privilege. With the flick of a pen, Newsom was putting the farm workers in their place.

The governor is, after all, the owner of a boutique winery. He is also the owner of a restaurant group, and in California, these industries are built on the backs of Mexican workers who are cheap, reliable, efficient and powerless. Newsom is rich; they are just Mexicans. The governor acted accordingly.

AB 616 was simply a reasonable attempt to give farm workers the same voting rights that other workers have. It would have allowed them to vote from home in union elections or deliver their ballots to state officials rather than vote at worksites where they could be coerced and intimidated by growers.

"This is the way we have been organizing for years," said Assemblywoman Lorena Gonzalez, a coauthor of AB 616. "Firefighters, teachers, hospital districts vote this way."

Erin Mellon, a Newsom spokeswoman, explained the veto this way: "The bill did not create an accurate list of the voter universe, did not give individuals an opportunity to vote in person on election day and did not solve the damaging result of the recent Supreme Court decision that denied union access to worksites to talk to farm workers — all of which could result in people being excluded from having a voice."

This comment from the governor's office is remarkable in many ways.

"Had he met with us, we could have easily clarified the misinformation his spokesperson now repeats. He would have learned the bill does not create an accurate list of voters at a farm because the 1975 Agricultural Labor Relations Act already does that. He would have learned why farm workers prefer a law giving them equal rights instead of the meaningless legislation declaring 'California Farm Worker Day' he signed on Oct. 4."

The bottom line is this: AB 616 would have made it easier for farm workers to organize. By vetoing it, Newsom proved he is against that.

We're talking about the most vulnerable workers in the state, who also happen to be indispensable to the state's essential agricultural industry. We're talking about Newsom vetoing the right of farm workers to vote by mail when opposition to voting by mail is, in general elections, otherwise known as Trumpism.

This is what growers do. Five years ago, California growers furiously fought a watered-down bill, also by Gonzalez, to give farm workers the right to overtime pay. They were the last group of workers in California to secure this right.

When I spoke to growers about their opposition in 2016, their arguments were purely emotional. For them, it was all about controlling the brown people working for them. It's an obscene power dynamic in which the numbers tell the story: Less than 2% of California's 400,000 or so farm workers belong to unions.

"Union elections are totally one-sided," Catherine Fisk, director of the UC Berkeley Center for Law and Work, told High Country News. "Employers would rather have voting happen at the workplace, where they can exclude the union. They've become very skilled at running vigorous and often illegal anti-union campaigns at the workplace. Public relations teams and lawyers train companies how to persuade, cajole and threaten the workforce to oppose the union."

"In vetoing AB 616, Governor Newsom has preserved the integrity of the Agricultural Labor Relations Act and protected the rights of farm workers in choosing whether to form or join a union," said Growers president and CEO Dave Puglia.

Yes, the growers — and the governor — posited their collective entitlement as a win for farm workers.

That's how absolute power over the powerless works. You deny them their rights while pretending you are doing them a favor. They say when a person shows you who he is, believe them.

This is who Gavin Newsom is.

The vibe at Donald Trump’s Des Moines rally Saturday could best be characterized as macho combative. Self-righteous aggression oozed from the paraphernalia at a long line of vending booths outside the Iowa State ...Read More

Questions like which came first, the chicken or the egg, are irrelevant because they’re unanswerable (although for the record, scientists come down on the side of the egg.) Here is a more relevant and important question....Read More