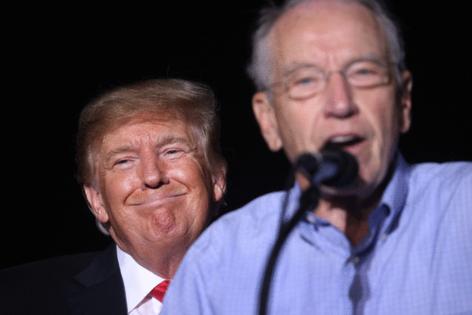 The vibe at Donald Trump’s Des Moines rally Saturday could best be characterized as macho combative. Self-righteous aggression oozed from the paraphernalia at a long line of vending booths outside the Iowa State Fairgrounds staging area. It bellowed from the flags bearing the message “F--- Biden. And f--- you for voting him,” or suggesting Trump urinating on Biden, or declaring, “Trump won, the whole world knows.”

If there were any doubt about the underlying message that Trump and his followers will live by their own rules regardless of what the law or science says, it was in Harley riders arriving un-helmeted, and crowds mingling freely, unmasked in a pandemic.

The musical backdrop warming up the crowd included The Village People's “Macho Man,” and the Trump introduction broadcast bellicose words from the movie "Patton":

"When you put your hand into a bunch of goo that a moment before was your best friend's face, you'll know what to do."

But this line that may best summarize Trump's mind-set these days:

Trump lost the election to Joe Biden, but will say or do almost anything to make people believe otherwise. That's up to and including, according to testimony at a House Select Committee investigation, instructing supporters to stage an insurrection at the Capitol. A Senate Judiciary Committee report says he pressured allies in the Department of Justice to help overturn the 2020 election results.

On Saturday, Trump continued to proffer his alternative version of history to the crowd:

"The election was rigged."

"A naked power grab by the likes of Biden, Pelosi and Ka-MA-la Harris."

"Extreme power grab … socialist … I think this is going to be a Communist country."

"The media is corrupt. … I proved (the) elections are corrupt. They used COVID in order to cheat and rig."

"Republicans have to stay strong, (not) worry about being impeached. They just don't seem to have the spine."

Writer Carl Bernstein, who famously co-authored a book about Richard Nixon and Watergate, called Trump's actions after the election a coup attempt on CNN's "AC360." When host Anderson Cooper marveled that "almost half of adult voters in this country are willing to go along with these lies so we are in a kind of civil war in this country," Bernstein observed, “We’re in a constitutional crisis.”

As to Republicans needing a spine, Trump meant they should submit to his version of the election outcome. He notably singled out for praise and reelection endorsement Sen. Chuck Grassley of Iowa. Bernstein also singled Grassley out — for his lack of integrity on the Judiciary Committee.

"Chuck Grassley was once a really honorable man with a terrific record serving his party," Bernstein said. "What he is doing is a disgrace, as (is what) his colleagues are doing." He also accused the Republican Party of an unprecedented subversion of the U.S. Constitution, saying: "It's very clear to these people in the Republican Party what happened. They want to win and prevail in this civil war at any cost."

In receiving Trump's endorsement on Saturday, Grassley had a telling response: “If I didn’t accept the endorsement of a person that’s got 91% of the Republican voters in Iowa, I wouldn’t be too smart. I’m smart enough to accept that endorsement.” So it's that simple. Like so many others, Grassley will stick with a known loser and swindler if it serves his own prospects.

In a commentary in Tuesday's Des Moines Register addressed to me, Iowa state Rep. Steven Holt, R-Denison, attempted to explain why 52% of Republican Trump supporters favor secession from blue states. He wrote that they "understand what America once was and what it is becoming. They cherish their freedom and liberty, they understand the importance of our founding values and they see the destruction of those values taking place before their eyes. They fear for the future of their children and grandchildren as America becomes increasingly unrecognizable."

Holt went on to criticize illegal immigration, critical race theory, forced vaccinations, "'woke' cancel culture" and the Green New Deal. I've written on those issues and won't try to cover them here, but I have a few questions for the representative in return.

As I see it, most of us try to teach our children to be honest and respectful, to obey the rules and take responsibility for their own conduct. But at no rally I’ve attended have the props been as vulgar or misogynistic as those of Trump supporters Saturday.

Rep. Holt, I would assume those actions don't comport with the values you fear losing.

You talk about America as a nation of equal opportunity through hard work. Trump calls critical race theory “code word for illegal government discrimination." But far from modeling equal opportunity, Trump seems to think his standing, money and privilege allow him to break the rules and subvert the law.

He is bellicose and dishonest about his election loss, blaming everyone but himself. His followers stand by or join in while he operates by different standards, demeans people who disagree with him and intimidates critics into backing off.

Now that an investigation has revealed he tried to make an illegal power grab to stay in office, should his political allies continue making excuses for him? Or are you, Rep. Holt, willing to call out Trump's allies for their complicity in his naked attempt at a power grab?

If you are, I'm ready to start a conversation on any of the other issues that concern you.