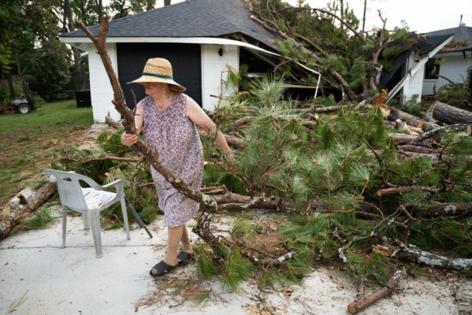 As a climate scientist in the deep South, I am often asked whether climate change is real. My usual response is to say, “Look out the window.”

As I type this in mid-September, 5.5 inches of rain have inundated our town, Hattiesburg, Mississippi, in six hours. Recently, Hurricane Ida — the 13th named storm of this season — ripped through the region, leaving at least 84 dead and an estimated $95 billion in damages in its wake from New Orleans to New England.

Contrary to stereotype, most of the Southerners I meet are interested in learning more about climate change. I tell them, as I do my college students, that extreme weather events like flash floods and hurricanes are linked to and worsened by climate change. So are the severe droughts and fires afflicting the West, as well as other disasters around the globe.

Several of my students were evacuated because of Hurricane Ida. Others went days without power. They understand that disasters of this kind are becoming the norm and will only worsen if we do not act now.

Two practical options for curtailing the worst effects of climate change are now being considered by Congress.

One, the Clean Electricity Performance Program, would pay utilities to shift away from fossil fuels and fine them for missing deadlines. It would significantly cut greenhouse gas emissions by nearly a gigaton by the year 2030, prevent an estimated 300,000 premature deaths from harmful air by 2050 and save $1.13 trillion in health costs.

Both measures are included in the Democrats’ $3.5 trillion budget reconciliation package, which is likely to be acted on in the coming weeks. Passage is hardly assured: Democrats can only afford to lose three votes from their ranks in the House, and none in the Senate.

Democratic Senator Joe Manchin, along with a couple moderate Democratic lawmakers, has signaled his opposition to both the Clean Electricity Performance Program and to the bill’s overall $3.5 trillion price tag, which would come largely from corporations and the wealthy. He has also cast doubt on the need to eliminate fossil fuels — from whose producers, The Intercept reported, he has personally made more than $4.5 million.

Fossil fuels are the single biggest cause of global warming. According to the latest assessment report from the Intergovernmental Panel on Climate Change, global carbon emissions must be reduced 45% by 2030 and reach net zero by 2050 to keep global warming under 1.5° C, the target set under the 2015 Paris Agreement.

Failing to achieve these goals could lead to widespread melting of sea ice, glaciers and permafrost; ocean acidification; an average rise of a meter or more in the global sea level; greatly increased extreme rainfall and drought; scorching heat waves; and rampant wildfires and tropical cyclones. In short, a far deadlier version of everything we’ve seen this summer.

Budget passage of these two measures is likely the last chance Americans have to forestall these effects. We don’t have another decade to implement these measures and meet the 2050 goal. The climate window simply won’t allow it.

Dr. Diana Bernstein (@db_climate) is a climate scientist and assistant research professor at the University of Southern Mississippi. This column was produced for The Progressive magazine and distributed by Tribune News Service.