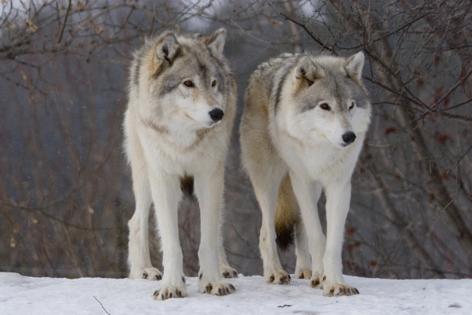 Wolves are baited with food, blasted with bullets and pierced through with steel arrows. They’re run down with snowmobiles and packs of dogs. They’re caught in limb-crushing traps and in snares that slam down on their necks, strangling them to death. All by people who claim to respect animals and love nature.

The war on wolves playing out in Wisconsin, Montana, Idaho, Wyoming and other states should be a wake-up call to anyone who still believes that hunters give a plugged nickel about “conserving wildlife.” You don’t “conserve” animals by killing them or by “managing” their populations so that there will be more of them to kill later.

It took nearly 50 years of federal protection under the Endangered Species Act to pull gray wolves back from the brink of extinction, which is where they ended up the last time hunters and trappers were allowed to pursue them with reckless abandon. If the slaughter continues, it won’t be the least bit surprising when these awe-inspiring canids are erased from the landscape once again.

After the Trump administration stripped wolves of their protected status in January, Kansas-based Hunter Nation sued the Wisconsin Department of Natural Resources to demand that it scrap its plans to gather data on the health of the population and instead just open the floodgates to hunting immediately. A judge agreed and the ensuing hunt in February resulted in a bloodbath during which hunters killed nearly 83% more animals than they were allowed to in a mere 72 hours. Officials stopped the hunt, but at least 218 wolves were already dead. Since the hunt occurred during the animals’ breeding season, many of the females were likely pregnant.

Wildlife researchers estimate that between 27 and 33% of the state’s wolves were wiped out, reducing the population to as low as 695 animals. But hunters are demanding another open season, this one with a much higher quota: 300. Some are even pushing for 500. The extent of their blood lust is appalling.

Hunters like to assert that wolves prey on farmed animals, claiming an altruistic motive for their killing sprees. But the U.S. Fish & Wildlife Service (FWS) reports that only a handful of the nearly 9.6 billion land animals that humans raise for food every year are killed by wolves. Far more die from health issues, giving birth, weather extremes or poisoning. Even domestic dogs kill more farmed animals than wolves do, including 100% more cows and over 1,900% more sheep. Besides, ranchers are reimbursed for their losses.

Wolves play a vital role in nature. FWS reports that wolves help keep animal populations healthy by preying only on the sickest and weakest animals for sustenance — unlike human hunters who target the largest and the strongest for their trophy value. The remains that wolves leave behind provide food for many other species, too, including ravens, foxes, coyotes, bald eagles and bears. When elk herds change their grazing patterns to avoid wolf predation, that allows for the regrowth of willow, aspen and cottonwood trees, which make excellent food for beavers and habitat for songbirds. Wolves also help keep deer populations in check — another reason why hunters want them gone. Destroying wolves destroys entire ecosystems.

Wolves mate for life, remain faithful to their partners in good times and in bad, and live in close-knit packs in which everyone pitches in. The killing of a single wolf can ruin multiple lives.

The fact that hunters refer to wolves — like the other animals they kill — as “game” reveals their true feelings: To them, animals are not sentient beings with families, feelings and the desire to live free of suffering. They are just pawns in a game, and snuffing them out provides fleeting amusement.

Cloaking the killings in terms like “harvest,” “heritage” and “tradition” is an attempt to make the violence more palatable to the 96% of the U.S. population that doesn’t hunt. The hunters hope that such language will also help keep them from demanding an end to the inordinate amount of control that the other 4% has over wildlife programs.

We must do away with terminology that masks what’s going on out there and call hunting what it truly is: a massacre of America’s iconic wild animals. And it’s time for the 96% to get a seat at the table.