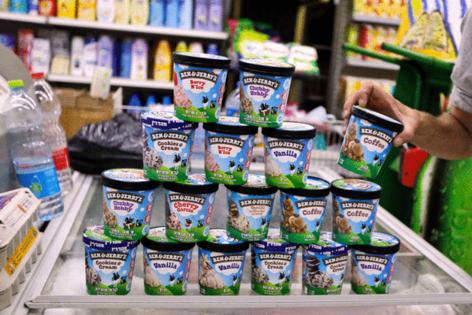 After its longtime Israeli distributor Avi Zinger promised to disregard the boycott, the ice cream maker declared it would not renew his license, ending a quarter-century of partnership. The boycott threatens the livelihoods of Zinger’s 160 employees, along with numerous Palestinian delivery workers.

Most important, this boycott maligns the world’s only Jewish state — today’s politically correct expression of Jew hatred — while denying the right of self-determination for Jews living in their ancestral homeland.

The “Occupied Territory” label, maliciously applied to the West Bank (more historically known as Judea and Samaria), ignores both the Jewish people’s historical connection to the land, along with Israel’s rights under international law to prosper there.

This region is the heart of the homeland of the Jewish people. In Hebron, thousands flock each week to the Cave of Machpelah. Purchased by Abraham nearly 4,000 years ago, it’s the burial place of the Jewish patriarchs (Abraham, Isaac and Jacob) and matriarchs (Sara, Rebecca and Leah).

In the City of David, King David built the first unified capital of the tribes of Israel. In Jerusalem, King Solomon constructed the Holy Temple more than 3,000 years ago. As Danny Danon, Israel’s former ambassador to the United Nations, once said, “(You) cannot erase the 3,000-year-old Jewish connection to Judea and Samaria.”

Israel also possess a legal right to thrive in this homeland. A bit of history explains why.

The Babylonians, Persians, Greeks, Romans, Arabs, Crusaders and Ottomans each denied sovereignty to the Jewish people. But in 1922, following the dissolution of the Ottoman Empire after World War I, the League of Nations included Judea and Samaria in land set aside in the British Mandate for the establishment of a new Jewish state.

The United Nations subsequently proposed to divide this land into a Jewish state along with a new Arab state — a proposal that the Arab population rejected in 1947. Months later, Israel declared its independence, facing the immediate onslaught from neighboring Arab states.

Israel survived, but the armistice resulted in Jordan unlawfully occupying Judea and Samaria (along with Jerusalem) and expelling the region’s Jews.

Nineteen years later — in 1967 — Israel emerged victorious after another war with her neighbors and lawfully gained possession of the entirety of Jerusalem, Judea and Samaria, ending Jordan’s illegal occupation. Presently, Israel allows the Palestinian Authority (the PA) to administrate the many Arab communities, while allowing Israeli businesses (many of which employ Palestinians) and families to thrive elsewhere in Judea and Samaria.

These Israeli businesses routinely employ Palestinians alongside Israelis, while Israelis are forbidden to work in the PA-controlled zones. For decades, the PA leadership has rejected Israel’s offers of increased autonomy and expanded control — actions Israel is not legally obligated to make — in exchange for a cessation of PA-funded terror and a simple recognition of Israel’s right to exist.

Furthermore, the boycott itself runs contrary to the touted Ben & Jerry’s value of “human rights and decency.” The company targets Israel, even though it’s the PA, not the Israeli government, that perpetuates human rights violations.

For instance, the charter of the Palestinian Liberation Organization — the entity delegating governing power to the PA — continues to call for the violent destruction of Israel. PA-operated schools and television stations poison residents with an endless diet of anti-Semitism. The PA routinely names public places in honor of terrorists and bestows millions of dollars annually as compensation to the families of terrorists.

In stark contrast, Israel remains the Mideast’s only true democracy. The right to vote, access to public health care, public education, freedom of speech and protection of legal rights are enjoyed by all citizens, regardless of race and religion. Across Israel, Muslims, Christians and Jewish people (and others) are free to practice their faith. This year, voters elected 15 Arabs to serve in the 120-member Knesset, and an Arab party serves in the current coalition government.

With these facts in mind, let’s call this Ben & Jerry’s boycott of Judea and Samaria for what it is: a boycott of Jewish people choosing to live in their homeland.

The words of Simon Maccabee more than 2,160 years ago ring true today in response: “We (the Jews) have not taken strange lands, nor are we ruling over foreign territory. We have returned to our ancestral inheritance, from which we had been unjustly expelled by our enemies. And now that we have been blessed with the opportunity, we will hold onto our ancestral land.”