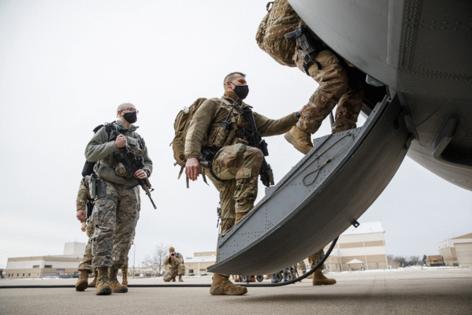 The mob of Donald Trump supporters that unleashed an insurrection on the Capitol building Jan. 6 put Washington, D.C. — and the rest of the country — in a state of extreme alert. Thousands of National Guard troops from across the country, including Illinois National Guard soldiers, arrived at the nation’s capital to secure the city ahead of Joe Biden’s inauguration. More were deployed to safeguard state capitals.

Deployments of troops from the Illinois National Guard and from other states continued into late May, to help fend off any further mayhem. Roughly 300 Illinois Guard soldiers were sent to Washington before the inauguration. Most of them returned after that day, but later Gov. J.B. Pritzker sent another 500 troops after the U.S. Department of Homeland Security warned of a “heightened threat environment across the United States.”

It was an anxious, tragic moment in our nation’s history, and Illinois National Guard troops did their part to restore to the nation’s capital an air of calm.

So far, Congress has failed to approve reimbursement for costs incurred by Illinois Guard deployment to Washington. If federal lawmakers neglect to act by Aug. 1, furloughs would have to be imposed, which would cut two months’ pay for roughly 13,000 Illinois National Guard members, along with an additional 1,000 civilian workers.

Members of the state’s National Guard deserve much better. In all sorts of crises, guard members make a difference. Remember National Guard personnel at COVID-19 vaccination sites, ensuring Illinoisans get their inoculations in a safe, organized manner? And in 1993, when massive floods along the Mississippi River covered roughly 873,000 acres of Illinois farmland and left legions homeless, members of the National Guard helped sandbag and made sure food and water got to thousands of Illinoisans.

Congress’ inaction is foolhardy in part because of the message that sends: Thanks for your help, now you can continue to do your part by forgoing two months’ pay. That’s not Washington having the National Guard’s back — that’s Washington turning its back on the Guard. Drills in August and September would have to be shelved, National Guard officials say, along with annual training events. Missing out on two months’ pay would cost someone with the service’s most common rank, specialist, about $700 and $1,200 if he or she were slated for annual training, according to Military.com.

The pay cuts would have “an incredibly negative impact … not only on our readiness, but on the morale and probably the retention of our soldiers and airmen long-term,” said Adjutant Gen. Richard Neely, commander of the Illinois Army and Air National Guard, in remarks reported this week in the Springfield State Journal-Register.