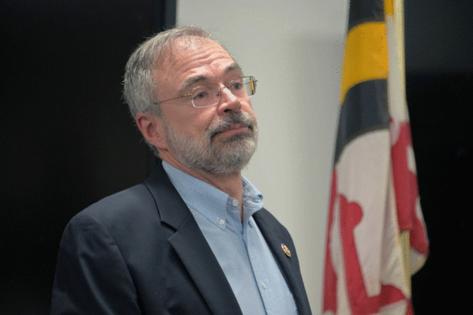 Just 21 members of the U.S. House of Representatives this week voted against honoring U.S. Capitol Police and other Jan. 6 Capitol defenders with a Congressional Gold Medal. These Hall-of-Shame candidates included none other than Maryland’s own king of crankiness, prince of piety and savant of sanctimony, Rep. Andy Harris. The six-term Republican represents Maryland’s 1st Congressional District in much the same way that saltwater mosquitoes represent the Chesapeake Bay region — annoyingly and sometimes painfully. Tuesday’s vote was just sort of par for the course.

We would normally dismiss this exercise as just another example of hyperpartisanship and hypocrisy by dyed-in-the-wool Back the Blue and Freedom Caucus types Marjorie Taylor Greene, Matt Gaetz and Paul Gosar (all fellow nay votes). These are the kind of House members who live primarily for shout-outs from QAnon and Tucker Carlson, not for accomplishing anything of substance on the Hill. But then Harris explained his vote. It turns out it was not merely his customary subservience to all things Donald Trump that proved decisive. It was not even some fig leaf such as cost of the medals or that some defenders were absent from the list or that the whole thing was China’s fault and five people didn’t actually die in the riot. Nope, it turns out there was a language barrier.

In a statement the congressman gave to the The Star-Democrat in Easton, he observed that while he found the resolution “commendable,” he objected to the use of the term “insurrection” to describe what happened on Jan. 6, suggesting the language had been “hijacked” by House Speaker Nancy Pelosi. “Regardless of our personal feelings on the events of that day, Congress must respect the constitutional principles of due process and the rule of law, and not politicize honoring our Capitol Police heroes,” he explained.

So what does insurrection mean? Federal law doesn’t spell that out so it’s reasonable to turn to the dictionary for the plain meaning of the word. Here’s the primary definition from Merriam-Webster: “an act or instance of revolting against civil authority or an established government.” And what happened on Jan. 6? The U.S. Capitol was attacked by violent protesters, many of whom have since freely admitted their purpose was to stop the official vote confirmation of Joe Biden as president and keep Trump in office. More than 150 police officers were injured in the attack. How is that not an insurrection? All the elements are present. To describe it in these terms is not an act of partisanship, it’s a simple acknowledgment of reality and of the English language.

That makes the congressman not only hypocritical but either wholly unfamiliar with the dictionary (unlikely given the physician’s Johns Hopkins pedigree) or quite confident that his constituents don’t know the meaning of the word. And if there’s a pattern to the 64-year-old Baltimore County Republican’s behavior, it’s to lowball his district’s collective IQ often behaving outrageously — backing false claims of election fraud or seeking to bring a handgun to the House chamber or, as he did just this week, castigating the University of Maryland and other Maryland colleges for requiring COVID-19 vaccinations of students because he considers it a potential health risk for young men to get vaccinated. And did we mention he’s a doctor?

Make no mistake, Harris is not just an embarrassment to the Grand Old Party and to his constituents but to Maryland Democrats. It was, after all, the Democratic Party in this state that helped him get into office, gerrymandering the district that once merely ran around the Bay into the sprawling, overwhelming politically conservative amorphous monster it is today, encompassing not only the Eastern Shore but snaking as far afield as Carroll, Harford and Baltimore counties. Redistricting surely helped Democratic incumbents in neighboring congressional districts but it virtually guaranteed any 1st District Democratic nominee’s irrelevance in the general election every two years.

The time for decennial redistricting is soon approaching and one can only hope that the General Assembly, which remains firmly in control of that process, will recognize the harm they’ve done and redraw lines that return some balance and reason to a district that once elected members like Wayne Gilchrest and Rogers C.B. Morton — intelligent, honest and fair-minded Republicans who were staunch defenders of the environment, the latter having served not only as Republican National Committee chair but in two Cabinet positions and ultimately as counselor to President Gerald Ford.

Whether they choose to redraw the lines or not, Maryland still deserves to be represented in the U.S. House of Representatives by someone who is not destined to be remembered as an enabler to insurrectionists.