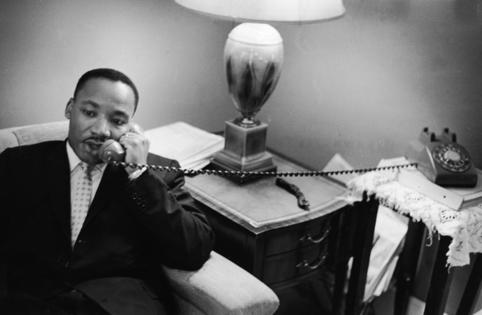 Each year, thousands of eighth grade students from across the nation take a class trip to Washington, D.C. The impact can be life-changing, especially as young people bond and chart different paths toward high school and adulthood.

While the D.C. trip is a rite of passage for many, student travel to Alabama can better tell a story of the United States that speaks to today's youth.

The story of American democracy is not complete without understanding events that led to and unfolded during the civil rights movement. The movement is an ultimate case study that reminds us democracy depends on the ongoing work of everyday people who insist this country be true to what it says on paper.

Those people include my parents and grandparents, who resisted white supremacy in the form of legal racial segregation through protests, building community, telling stories, raising families and finding joy while surviving Jim Crow in Alabama. Now, after years of working as an educator, I lead civil rights tours to the South so others can learn.

Some of my most impactful trips have been traveling to Alabama with curious, energetic eighth graders. I appreciate the foresight of teachers and administrators who make these trips happen. They have taught me that Alabama — more than places like D.C. — deeply resonates with Gen Z students and brings their humanities curriculum to life.

In Alabama, we see democracy in action.

In D.C., students can visit monuments, and even see the U.S. Constitution and other founding documents. In Alabama we get to see the holes and hidden levers of this foundational document. We stand in places where everyday people have used those levers to expose and partially fill those gaps.

Collective struggle has been and continues to be required for everyone to have access to the promises of American democracy. In Birmingham, Montgomery, Lowndes County and Selma, we learn about many of the major campaigns that dealt fatal blows to the system of Jim Crow within a mere 10-year period.

In Alabama, we understand voting rights are not guaranteed.

Voting was not a reality for Black people in the South for 100 years after passage of the 15th Amendment. In Selma, Alabama, we can walk from Brown A.M.E. Church and across the Edmund Pettus Bridge. As we walk, we remember attempts to march those 53 miles to Montgomery, from Bloody Sunday to the culmination of the third march on the steps of the Alabama Capitol. We understand this work (with Black organizing in Mississippi) laid the foundation for the 1965 Voting Rights Act and that contemporary challenges to voting require organizing and resistance.

In Alabama, we learn about the history of policing.

We see how policing has been used to intimidate people, suppress dissent and stop social movements. The police murder of unarmed voting rights activist Jimmie Lee Jackson is the inspiration for the Selma to Montgomery march. It is just a fact that state violence through assault, surveillance and incarceration is a part of every single fight for justice during this era.

In Alabama, we encounter a humanized MLK.

We not only learn about Martin Luther King Jr.'s visionary leadership but nuance about his struggles, doubts, incarceration, critique of white moderates, and constant threats on his life and his family's.

In Alabama, we connect the dots between slavery and prisons.

We face how the country's racial hierarchy has been enforced by brutal dehumanization, which remains with us today in the system of mass incarceration. We confront this legacy in Montgomery at the National Memorial for Peace and Justice and Legacy Museum, established by the Equal Justice Initiative.

In Alabama, we confront the history of racially motivated mass shootings.

We can touch the walls of 16th St. Baptist Church. This church was an organizing space to plan marches, boycotts and other forms of civil disobedience during the 1963 Birmingham campaign. In September 1963, this sacred site was bombed by white supremacists on a Sunday morning, killing four girls, blinding a fifth. We not only mourn their deaths but also see how hard it is to find "justice" in the wake of racial violence.

After this visit, I've seen students grapple with the more recent memory of the Charleston church massacre, mass shootings at Pulse nightclub in Florida, Tree of Life synagogue in Pittsburgh, and other attacks in places considered safe spaces for oppressed people.

In Alabama, we see young people lead the way.

Today, young people are directly addressing today's most pressing issues, including racial injustice, climate change and gun violence. Young people have been leaders for justice for decades. When many adults in Alabama were tired and scared, marchers as young as 8 participated in civil disobedience, endured police violence and mass arrests. In Birmingham, monuments in Kelly Ingram Park honor the courage of young people of the Children's Crusade. Students can see their own reflection there.

Washington, D.C., is an understandable destination of choice for many because it aligns with curricular standards that include the philosophy undergirding our government and its foundational documents.

But Alabama also tells the story of our nation — a more complete one. This story is also about citizenship, what it entails and who gets to claim it. It is the story of how and when the government failed to govern everyone. It shows how our foundations have been tested.

More than mega monuments and sprawling museums on the Potomac, sites related to the civil rights movement and the Black freedom struggle offer us incredible insight about who we are and where we are as a country. Nothing is more impactful than seeing how these trips can transform and shape young people's perspectives.

I'm not knocking D.C. The city is a must-see, especially the National Museum for African American History and Culture. But when I want young people to really understand the history of America, I cast my eyes to Alabama. If you are preparing for a class trip in 2022, you should too.

The music people adore when they’re young often crystallizes their identities and unlocks oceanic feelings. It’s easy to latch onto certain songs, become defensive about their brilliance and refuse to let go.

The pro-Trump cable propaganda network One America News is headquartered in a sandy-colored building in the San Diego sun.

It doesn't look like the epicenter of a collective delusion in which Donald Trump remains ...Read More

We have seen each other through some of the toughest times, as well as some of the best and a lot of the rest. We ...Read More

Only about half of respondents said they found Chicago police officers to be trustworthy. A top ...Read More