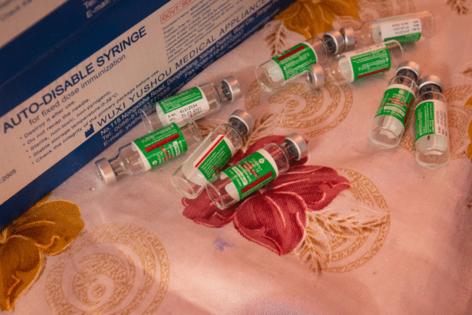 President Joe Biden’s decision to donate 500 million COVID-19 vaccines to other countries by June 2022 is an important step toward restoring the United States’ global standing. Another, parallel foreign policy solution could perhaps do even more. It is simple, cost-effective and could improve the health and well-being of billions of people — especially children.

Inexpensive treatments — as little as 50 cents per child — can prevent neglected tropical diseases (NTDs), such as intestinal worms, that are among the most common illnesses affecting the world’s poorest and most marginalized people.

New evidence confirms that ensuring widespread access to NTD treatments generates clear health and humanitarian gains, while yielding remarkably high — and sustained — economic returns to society. As many nations turn inward, the United States should seize the opportunity to expand its support for proven, cost-effective solutions to global health challenges.

While the COVID-19 pandemic is ravaging the developing world, infecting hundreds of thousands of people daily and pushing many into poverty, more than 1 billion people — nearly one-seventh of the world’s population — continue to suffer from tropical diseases like elephantiasis, trachoma, river blindness and intestinal worm infections, which cause severe pain, illness and long-term disabilities.

In fact, the pandemic has exacerbated the harm caused by these diseases by complicating mass treatment efforts, including those based at schools, which have been shuttered in many countries for long stretches.

Among children, the impacts of NTDs are particularly acute: Infections cause malnutrition, impair intellectual and cognitive development, and stunt growth. These illnesses undermine productivity and growth, and stymie progress toward global health and development goals. Yet these diseases are largely preventable, and most can be treated with a few simple and inexpensive pills.

Compared to the enormous feat required to develop and deliver the COVID-19 vaccine, you would think governments would see NTD treatment as a quick, obvious win. Yet, the opposite is true right now.

Increasing demands on government budgets because of the pandemic are forcing many to cut support for NTDs, halting — and potentially even reversing — hard-won progress. The British government, a long-time global leader in foreign assistance, recently announced that it would cut 90% of its funding for these diseases as part of budget reductions caused by the financial double-whammy of the pandemic plus Brexit.

As a result, millions of people will go untreated and, tragically, many medicines that are already in-country will expire on the shelf, due to a lack of funds to distribute them. For the world’s most vulnerable populations, the consequences will be catastrophic.

The United States is already a treatment leader on NTDs. It has allocated $988 million to this program since 2006, helping provide 2.8 billion treatments worldwide. Now, the Biden administration should encourage other wealthy countries to deepen their investment. Doing so will have significant impacts on long-term social and economic outcomes, enabling a more rapid and equitable recovery from the current global pandemic.

Take intestinal worms, which are among the most prevalent and treatable NTDs. These worm infections can have lifelong health consequences, including stunted growth, weakness, anemia and adverse immunological effects.

Starting in 1998, Nobel laureate Michael Kremer and I studied a public-health program in Kenya providing treatment for intestinal worms to tens of thousands of schoolchildren. In a randomized controlled trial, we compared schools where treatment was offered with otherwise identical schools where it wasn’t. We found that treating children for worms decreased primary school absence by 25% — showing that a simple health intervention had enormous impacts on education.

We then tracked a representative sample of these children over 20 years to gather information about their earnings, living standards and other life outcomes. The results are startling.

Our new study, published this spring, found that the individuals who received additional deworming treatment in school (and are now in their late 20s and early 30s) reported 13% higher hourly wages and 14% higher spending than those who did not get the treatment. More of them also moved to large urban areas, which gave them better economic opportunities.

These findings suggest that the more we invest in treatment now the greater the dividends later. Generations of children who grow up without worm infections can attend more school and earn higher incomes — ultimately experiencing less poverty and driving global economic growth.

This return on investment is increasingly recognized by governments. Countries including India, Kenya, Nigeria, Ethiopia and Pakistan carry out mass deworming programs that reach hundreds of millions of children each year. Even so, more than 800 million children remain at risk of parasitic worm infections.

Despite the commitment of governments to these cost-effective programs, some need external funding and support. We have the evidence to make the case for the economic benefits and have also developed a new open policy tool to help decision-makers understand the costs and benefits of treatment and inform programmatic investments.

Over the last two decades, governments, nonprofit organizations and private donors have made enormous progress against intestinal worms and other NTDs, using extremely cheap, cost-effective treatments. As a result, we are closer to beating these pervasive diseases than ever. But we aren’t there yet.

The U.S. needs to intensify efforts to combat these debilitating infections and prevent longer-term setbacks in global health and economic systems. Beyond vaccine diplomacy, there is a real opportunity for the Biden administration to fill the critical void in NTD investment.

Governments around the world have been made acutely aware of how diseases — such as COVID-19 — affect health, the economy and the general well-being in their nations. They have an opportunity to look beyond the pandemic to expand support for affordable treatments that improve hundreds of millions of lives.

Edward Miguel is the Oxfam Professor of Environmental and Resource Economics and faculty director of the Center for Effective Global Action at UC Berkeley.