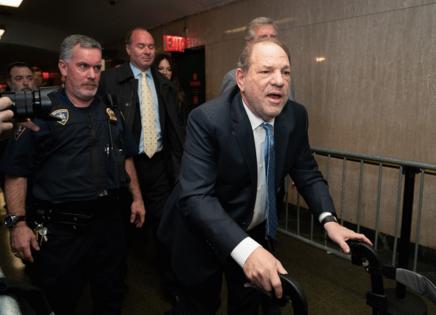 The breadth of Weinstein’s revolting sexual predation — first revealed in 2017 by The New York Times and The New Yorker — is so staggering that he was charged on both coasts after dozens of women in the entertainment industry came forward with anguished stories of being assaulted or harassed by the producer who had the power to make or hinder their careers. More than 80 women in the U.S. and Europe have accused him of sexual abuse.

After being convicted in March 2020 in a Manhattan court of raping one woman and committing a felony sex crime against another, Weinstein was sentenced to 23 years in a New York state prison. Meanwhile, the Los Angeles County district attorney’s office filed multiple counts of sexual assault against Weinstein. More charges were added in October. Today he stands accused of assaulting five women in Los Angeles and Beverly Hills.

One accuser says he lured her into his hotel room after a meeting at the Montage; another says he attacked her inside the hotel Mr. C.

Since Weinstein’s conviction, his attorneys have tried everything to avoid coming to trial in Los Angeles, asserting he was in bad health and awaiting treatment in New York, and claiming that the L.A. district attorney had filed incomplete paperwork. A New York state judge rejected those claims and on Tuesday ruled that Weinstein could be extradited to Los Angeles. That is expected to happen next month.

Of course Weinstein deserves his day in court. But it still seems amazing that the system of justice got as far as demanding he stand trial in two courts, let alone one. In a society where men still wield most of the power in extremely competitive businesses, it was groundbreaking four years ago that women were willing to come forward to accuse Weinstein and risk banishment in Hollywood. Instead — finally — it was Weinstein who got banished, as the #MeToo movement saw a cascade of men in entertainment, government, business, academia, restaurants — any place where power could be misused — implicated in sexual harassment and assault cases and fall from grace. Not only their peers believed the accusers; so did law enforcement agencies, prosecutors and judges.

But here is something important to emphasize: This shift in culture is not about establishing a blanket credo that every accusation of sexual assault is true; it’s about dismantling a system that immediately dismisses every accusation as false.

That’s why it’s so important that Weinstein stand trial in both New York and Los Angeles — and why it was crucial that the L.A. prosecutors aggressively pursued the matter and Erie County Court Judge Kenneth Case ruled the way he did.