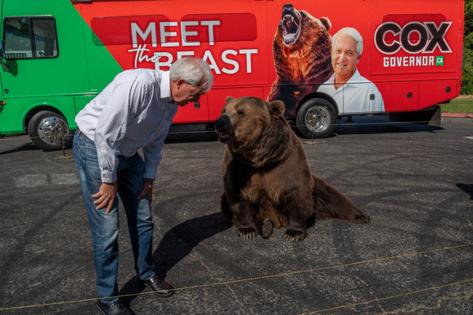 So, a Kodiak bear walked into a politician's campaign news conference in Sacramento on Tuesday, and I don't know whom to pity more — the bear or the politician. I'll go with the bear.

Tag, as the 9-year-old bear is called, had no choice but to be rented out for the kickoff of Republican John Cox's long-shot bid to replace Gov. Gavin Newsom should the recall campaign succeed. Cox, on the other hand, deliberately gave his bus tour the hokey handle "Meet the Beast," which is supposed to play off Cox's promise to be a tough beast of a governor. Like that's really the image a 65-year-old man wants to go for when he's running for office these days?

Animal welfare advocates were rightly appalled by the idea that anyone would force a bear to be a political prop. As Judie Mancuso, the founder of the political advocacy group Social Compassion in Legislation, wrote in a blast email, "The last thing we want to see is a 1,000 pound bear dragged around the state."

Live bears or any other kind of wildlife should not be paraded around as entertainment. And that's different from wild animals living in a zoo or sanctuary. Generally, wild animals have to be disciplined to get them to perform or obey their handler's commands at an event. Tag, who has appeared in TV shows, was rented to the campaign by Steve Martin's Working Wildlife, which is based on a ranch in Frazier Park and says on its website that its staff are adherents of "'positive reinforcement' training methods."

The bigger point is that wildlife shouldn't be used as trained entertainment performers at all.

And apparently Cox is unfamiliar with how seriously Californians take animal welfare. This is a state that outlaws the use of wild and exotic animals in circuses. And though Cox's event wasn't technically a circus, if he had rolled into Los Angeles with the 1,000-pound bear, he would have been violating a 2020 city ban on the use of exotic animals for any entertainment purposes.

Cox told The Washington Post, "This is not a wild animal. This is an animal that has been raised in captivity."

No, the bear is, indeed, a wild animal. Whether animals are raised in the wild or captivity, wild species remain wild. (Been to a zoo lately, Mr. Cox?) Bears are not domesticated animals that you can or should keep as pets.

It's ironic that Cox chose a Kodiak bear to bring along. The Kodiak, the largest bear in the world, is a subspecies of the grizzly bear, a sad reminder of when ranchers and hunters in California were allowed to slaughter grizzlies into extinction — one of the state's most disgraceful periods of wildlife mismanagement. Today, the only place you'll find them in California's great outdoors is on state flags blowing in the wind.

If Cox had really wanted to impress Californians who cherish wildlife, he could have talked about ways to protect it — such as getting rid of the second generation rat poisons that are killing animals, or building more highway wildlife crossings.

Cox, no doubt, is chortling about all the press generated by the bear's appearance. All news is good news when you're a candidate desperate for publicity. But this piece of news could come back to bite him in the butt — figuratively or literally.