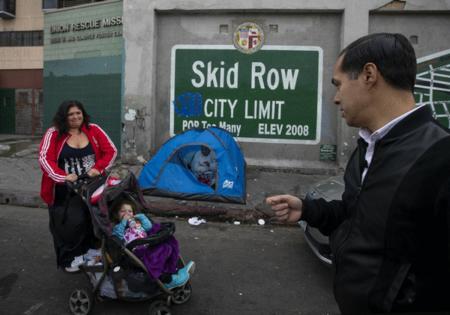 Anger and frustration rightfully jump out from each page of the recent federal court order creating a right to shelter for the 4,600 unhoused residents in downtown Los Angeles’ skid row neighborhood. The 110-page document powerfully critiques the decades-long history of counterproductive public policies that drove up housing costs, exacerbated racial wealth disparities and sought to contain homelessness within skid row.

As U.S. District Judge David O. Carter observes in his April 20 order, these policies have led us to a point where more than 66,000 Los Angeles County residents are homeless each night, 42% of whom are Black — even though only 8% of county residents are Black — and where 1,383 people died on our streets last year.

While the court correctly analyzes L.A.’s homeless history and current crisis, the proffered solution of more shelter beds is no solution at all. As the 18,395 people expected to be sleeping in Los Angeles shelters tonight understand too well, shelter provides some protection, but they are still homeless. By failing to acknowledge the root of the problem — that renter incomes have not kept pace with skyrocketing housing costs — the order’s shelter-focused solutions may be worse than our horrendous status quo.

The order is cloaked in the language of racial justice, using the word “Black” 148 times by my count — Black people, Black residents, Black women, Black Angelenos. But nothing in it actually addresses racial injustice. Even worse, the court explicitly states that once shelter has been offered to the residents of skid row, it will again allow Los Angeles to criminalize sleeping on sidewalks and in parks.

People tend to view homelessness through one of two lenses. The first is charity-focused and emphasizes the need for greater personal responsibility — people experiencing homelessness should get their act together, get sober, get a job and return to being productive members of society. This approach tends to focus on providing additional shelter to alleviate the suffering that comes from living on the streets, and it encourages more coercive tactics — such as policing and institutionalization — to force people to make the “right” decisions.

The second lens is justice-focused and stresses the role of larger societal forces in creating homelessness. Rather than focusing on individual behavior, it zeroes in on the gap between rental costs and incomes. Since 2000, median rents in L.A. County have increased by 54% while median renters’ incomes have only increased by 16%, according to the California Housing Partnership.

These two lenses are not mutually exclusive. While we provide shelter to alleviate suffering on our streets, we can and must also invest in long-term solutions that address imbalances between housing and income.

Unfortunately, by seeking to focus all existing resources on shelter, the recent court order wholeheartedly embraces the charity-focused approach. Even after recognizing that without “major rezoning initiatives, Los Angeles will continue to lack the infrastructure to meet the homeless crisis” the order still critiques “the deliberate, political choice to pursue the development of long-term supportive housing at the expense of interim shelters to get people off the streets in the near-term.”

The order’s short-term focus is not an accident. Concentrating on shelter rather than housing moves people experiencing homelessness out of sight. For elected officials unwilling to take expensive and politically fraught steps to produce more affordable housing in the neighborhoods they represent, the notion that we can address the problem by sweeping folks out of sight is an attractive alternative.

But this plan takes us back in time and onto the hamster-wheel that Los Angeles used to tread — where the vast majority of our resources focused on alleviating suffering but little was done to address the underlying structural causes of homelessness. Until we address the fundamental disconnect between what people earn and the cost of housing, people will continue falling into homelessness. Even if everyone on the streets could get into housing tonight, the newly homeless would need to be housed tomorrow.

I want to be clear: I am not defending the status quo. The current horror on our streets is disgraceful.

But the order fails to articulate a vision that would end homelessness. Our collective failure to build significantly more affordable housing in every neighborhood is at the root of our homeless crisis. We need to be bold. New affordable housing will be built — if we dedicate public land, cut through red tape, loosen land-use restrictions and limit people’s ability to delay or shut down affordable housing development.

Rather than cutting through barriers to building affordable housing on a scale that would actually end the homeless crisis, the order conflates giving people shelter beds with ending their homelessness. Shelter does not end homelessness. Only a home does that.