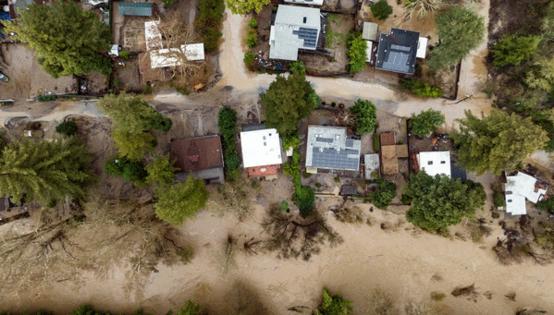 LOS ANGELES — As California emerges from a two-week bout of deadly atmospheric rivers, a number of climate researchers say the recent storms appear to be typical of the intense, periodic rains the state has experienced throughout its history and not the result of global warming.

Although scientists are still studying the size and severity of storms that killed 19 people and caused up to $1 billion in damage, initial assessments suggest the destruction had more to do with California’s historic drought-to-deluge cycles, mountainous topography and aging flood infrastructure than it did with climate-altering greenhouse gasses.

Although the media and some officials were quick to link a series of powerful storms to climate change, researchers interviewed by The Times said they had yet to see evidence of that connection. Instead, the unexpected onslaught of rain and snow after three years of punishing drought appears akin to other major storms that have struck California every decade or more since experts began keeping records in the 1800s.

“We know from climate models that global warming will boost California storms of the future, but we haven’t made that connection with the latest storm systems,” said Alexander Gershunov, a climate scientist at Scripps Institution of Oceanography. “Assuming that these storms were driven by global warming would be like assuming an athlete who breaks a record was on steroids.”

Mike Anderson, official state climatologist for California, suggested that the recent series of atmospheric rivers — long plumes of vapor that can pour over the West Coast — was a grim reminder that in a place so dry, sudden flooding can bring catastrophe.

“Each of the recent atmospheric rivers were within the historical distribution of sizes of atmospheric rivers,” Anderson said, “It will take further study to determine how warming temperatures influenced the sequence or the sudden transition from dry to wet and soon back to dry.”

The parade of storms also dumped desperately needed snow on the Sierra Nevada range — nearly 250% of average for this time of year. It also recharged giant reservoirs that had dwindled to weedy channels. In one instance, Lake Cachuma, about 15 miles northwest of Santa Barbara, rose from 36% capacity to nearly 80% in just one day.

But in a region whose water supply has been severely depleted by more than two decades of megadrought stoked by climate change, researchers suggested that some observers were too quick to reach for superlatives.

“A group I call ‘mediaologists’ always hype the current situation to make it seem worse than the last one,” Gershunov said, using a pithy play on the word meteorologists.