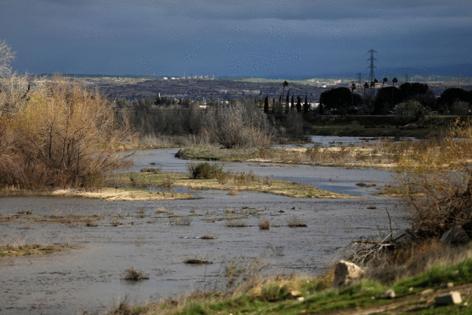 LOS ANGELES — A series of atmospheric river storms that dropped record-breaking rain and unleashed chaos across California will end with a whimper this week, as a weak storm will give way to what's expected to be a prolonged drier period.

The latest system, a drizzler compared with the powerful deluges that have hammered the state for the better part of a month, will move into the San Francisco Bay Area on Wednesday afternoon and evening, according to the National Weather Service.

It's expected to "bring a quick shot of rain," with up to half an inch possible in higher elevation areas, said Dalton Behringer, a meteorologist with the National Weather Service office in Monterey.

A forecast released by the office showed more modest totals, largely between 0.1 and 0.2 inches, expected across the region.

"Rain should be totally out of the picture by sunrise tomorrow morning," Behringer said Wednesday.

He characterized the latest storm as "an entirely new system ... not really of atmospheric river origin like these past events have been."

The story is much the same across the thoroughly soaked state. In the Central Valley, "we have some overnight rain tonight, but it's (only) going to be a little bit — nothing earth-shattering," said JP Kalb, a meteorologist with the National Weather Service in Hanford.

"We are looking at less than a tenth of an inch in most places," he said Wednesday morning.

The impacts will be lesser, and likely nonexistent, the farther south you go. San Luis Obispo County could see some sprinkles, and there's a chance of light rain Thursday in the Inland Empire, but forecasts show scant chances of the wet stuff this week throughout a wider swath of the Southland.

"We have a weak system that is trying to drop southward into the southern part of the state, but it does not look like it's going to make it to Los Angeles," said David Sweet, a weather service meteorologist in Oxnard.