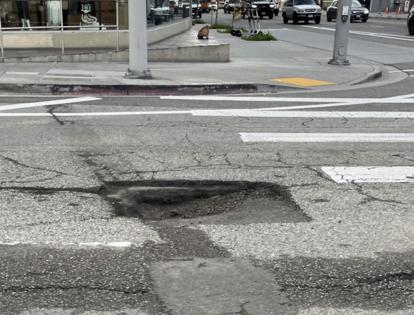 In Los Angeles, requests for pothole repairs have soared as downpours have crumbled streets. Since Dec. 30, there have been 2,407 potholes reported on Los Angeles roads, with 722 this weekend alone. So far, 812 of those reported have been fixed, said Elena Stern, a spokesperson for the Department of Public Works.

Michael Cox, a manager with the Street Maintenance Division of DPW, is in his 34th year working for the city.

“This is the busiest we’ve seen it in quite some time,” he said.

The city has “eight or 10 pothole trucks working per day” in a grid system, Cox said, each dispatched to an area with especially high request volume.

Pothole issues are not limited to Los Angeles, of course.

As of Monday morning, a stretch of northbound State Route 71 near Pomona had to be closed for “urgent pothole repair,” according to a tweet from the California Department of Transportation. Meanwhile, in Fresno, crews reported at least 30 areas with pothole issues, and vehicles had been damaged, per ABC30.

In Redwood City, a pothole on the northbound U.S. 101 Freeway caused blown-out tires and had motorists scrambling for repairs.

“We were overwhelmed,” said Kurt Boegner, who works at Redwood General Tire, less than half a mile from the freeway. “By 7:30 in the morning, we already received 15 calls related just to that pothole.”

“Pothole damage can be extremely expensive,” said Doug Shupe, a spokesperson for the American Automobile Assn. “The most common type of damage is a flat tire and bent rims, but potholes can also damage suspension. The faster you hit a pothole, the more damage that can occur.”