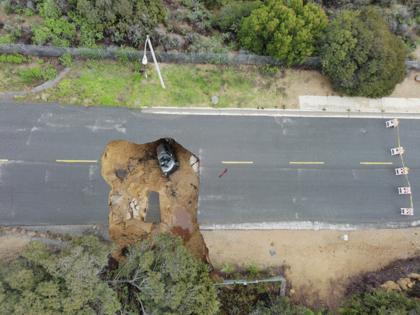 SACRAMENTO, Calif. — Another moderate storm is expected to hit California on Sunday evening and continue into Monday, bringing more rain along the coast and inland valleys and up to 2 feet of snow in the mountain regions of Northern California.

But meteorologists say there’s good news on the horizon. The series of storms that has ravaged the state — flooding communities, forcing evacuations, shutting down major highways and leading to at least 19 deaths — should end this week.

“It looks like a dry period that we haven’t seen since the day after Christmas when this all started,” said Eric Kurth, a meteorologist with the National Weather Service in Sacramento.

The dry spell is expected to begin in Southern California on Tuesday, after up to an inch of rain falls overnight Sunday and continues with scattered showers on Monday.

Rain is similarly expected in the North Coast, Sacramento region, San Francisco Bay Area and Central Coast Sunday and Monday before a much lighter system begins Wednesday. By Thursday, all of California should experience a respite from the rain, meteorologists said.

That’s when state and local officials will begin to assess longer-term rebuilding efforts in areas heavily damaged by the storms.

The Biden administration on Saturday approved Gov. Gavin Newsom’s request for a presidential disaster declaration to support the state’s response to flooding, mudslides and landslides in California, where 41 counties are under emergency declarations.

Brian Ferguson, a spokesperson for the Governor’s Office of Emergency Services, said the state continues to monitor the Monterey Peninsula and the Salinas River, where a flood warning remains in effect near the town of Spreckels.

Concerns that river flooding could cut off communities, such as Monterey and Carmel, on the peninsula have abated, though the state is still closely watching water levels on the river.

“Santa Barbara, that’s a different challenge and maybe a more challenging situation, because there the threats are all about land movement,” Ferguson said, adding that mudslides present a major risk even after the storms pass.

He said the Guard is working to get debris out of flood control channels and improve drainage to lessen the impact of mudslides.

In Merced County, levee breaks on Bear Creek led to several feet of water in homes and schools, creating a need for another long-term recovery effort, he said.

Santa Cruz experienced “high tides, storm surges, wind and water all at the same time,” causing significant damage to the state beach and the town of Capitola, Ferguson said.

“The water movement out of the Santa Cruz Mountains just moves so quickly that there is pretty significant damage to roads and bridges and other work that may take longer to recover from as well,” he said.

Another flood warning remains in effect along the Sacramento River, affecting Glenn, Butte and Tehama counties.

SAN JOSE, Calif. — Joany Morgan looked at her home in despair, the blue-hued house sitting in a foot of muddy water just across from the historic Felton Covered Bridge in the Santa Cruz Mountains. Yet again, the San ...Read More

SAN JOSE, Calif. — After a few days break from the downpour, another storm moved into the Bay Area on Saturday with wind gusts topping over 45 miles per hour in the morning. Those winds could topple trees, sending them ...Read More