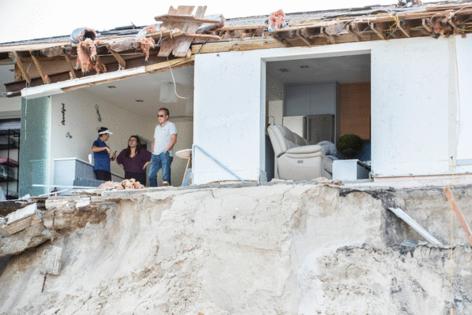 WILBUR-BY-THE-SEA, Fla. — Beach erosion from Hurricane Nicole toppled swimming pools, walls, rooms, staircases and backyards down to the beach, with some of the wreckage washed into the ocean, along a normally scenic stretch of beachfront Wilbur-By-The-Sea, a community wedged between Daytona Beach Shores and Ponce Inlet.

About 24 hours after the remnants of the storm left the area behind, owners who left under mandatory evacuation orders returned to find what was left of dream homes and vacation spots.

Some could be seen from the beach removing clothing and personal items from closets that were split in half, others were shocked as onlookers snapped photos with phones from the beach below.

“There’s a lot of broken dreams down there,” said Steve Amburgey, of Windermere, who drove over to check on his family condo nearby. His building was spared from the catastrophic erosion that others faced, but still sustained boardwalk damage from Nicole. During Hurricane Ian about six weeks before, an air-conditioning unit blew away.

But others fared far worse.

Initial assessments count $481 million in property damage from Nicole in Volusia County, though officials said that number will certainly rise as their work continues. So far, 18 single-family homes are deemed destroyed along with one multifamily structure, according to a Friday news release.

Single-family home damage was estimated at about $13 million, while $277 million in condominium damage has been documented with $190 million to commercial properties.

On Thursday, county officials deemed 24 hotels and condos unsafe for people to enter, and at least 25 homes in Wilbur-By-The-Sea were structurally unsound, a spokesperson said.

No fatalities have been reported for Nicole in Volusia County; for Hurricane Ian there were 5.