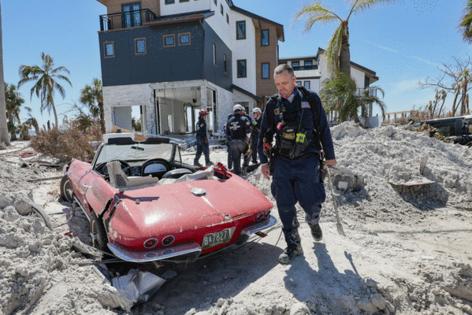 They go from door to door, hoping to find survivors and accounting for the dead, a grueling mission that continues even as bright and sunny skies make monstrous Hurricane Ian seem like something out of our deepest nightmares.

“We end up in this paradise — but next to us is an apocalypse,” one Miami-Dade firefighter assigned to a rescue team told the Miami Herald’s David Goodhue.

As Southwest Florida assesses the damage and figures out what the future may hold in a post-Ian world, rescue teams from around Florida and beyond go about their tasks, on foot and sometimes with dogs, knocking on the doors of wrecked homes and businesses, looking under piles of debris and checking inside the shells of buildings. They work methodically, block by block, but not without emotion,

“Forget about our jobs,” the firefighter said. “We’re human.”

In an event as traumatizing as this one, mental health can be precarious for those directly affected. Hurricanes can trigger anxiety, PTSD and uncertainty about the future. Mental-health providers are still working with families who felt the impact of Category 5 Hurricane Michael, which hit Florida’s Panhandle in 2018.

But there is also a toll on the rescue teams in this disaster, as there was after the Surfside condo collapse. Looking for those who perished and helping those who survived is hard on the body — but harder on the psyche.

Urban Search and Rescue Task Force 2, made up mostly of city of Miami firefighters, arrived in Fort Myers Beach before dawn on Thursday, when the winds were still high and the rain hadn’t yet fully stopped.

In a landscape that looked as though a bomb had gone off, they began looking for survivors. They found them, residents and tourists, emerging disoriented, asking for help.

Some had chosen not to evacuate. Others couldn’t, bound to their homes by disabled relatives or by a lack of resources to leave. They had apocalyptic tales to tell, of windows bowing in and buckling roofs, of water rushing into lower floors,and hours of fear that they would not survive.

The team arranged for them to be evacuated.

They also found the dead. “Inside their homes. Outside their homes. On the streets,” Gerry Rodriguez, search team manager with Task Force 2 told the Herald. There was no pattern, just randomness. Many had drowned in the storm surge. It’s hard to imagine how difficult it must be to see that loss of life, even for those who are trained to handle such tragedies.

There are long weeks and months of reckoning ahead of us. We’ll have to confront a newfound dread that fierce storms like Ian may become more frequent as climate change continues. We’ll have to consider what it means to rebuild in risky places like barrier islands. We’ll have to contend with questions of whether anything could have been done to prevent so many deaths and so much damage.

But for now, let’s take a moment to be grateful for those doing the hard work of searching for the living and the dead in the wake of the storm, and remember that they, too, are human beings.