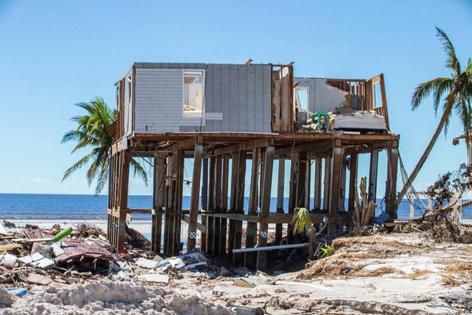 The number of people displaced — which does not include those who are not staying in shelters — was yet another sign of the level of destruction left behind by Ian, as state and federal agencies continued to recover bodies and transport stranded residents.

The initial emergency phase of rescuing hurricane victims with medical emergencies has largely passed, officials said. The vast majority of rescues at this point are from people who are left stranded in the barrier islands.

In areas that took the brunt of the storm’s landfall within Lee County, including Matlacha and Sanibel Island, some residents journeyed back to survey their homes. But the lack of water and basic infrastructure is forcing them back into limbo, said U.S. Coast Guard Rear Admiral Brendan McPherson.

“I think after camping out there after about a night or two, they’re realizing that that’s not a viable option,” McPherson told reporters on Saturday during a call with federal officials on the Ian response. “The state is working to get those people to safety and put them in a stable location to reunify them with families. And then we’ll do the, you know, I’m sure the state will, with the support of FEMA, will do the hard work of recovering.”

But on Saturday, recovery seemed a long ways away. With over 50 people potentially dead, search and rescue efforts ongoing, persistent water problems in Lee County and over a million without power, the Federal Emergency Management Agency said it was still too early to identify what types of transitional housing programs it was likely to launch.

“We’re working closely with the state on how to tackle all recovery issues, including housing. Those discussions have started and are ongoing, but there’s no resolutions to those discussions,” said Anne Bink, FEMA’s Assistant Administrator for response and recovery.

In the artsy fishing village of Matlacha, some of the only sounds Saturday morning were birds diving into the flat water, boats beginning to shuttle back and forth from the mainland and alarms blaring from empty homes.

People who stayed during the storm and insist on remaining afterwards were walking their dogs, cleaning up their properties or taking pictures.