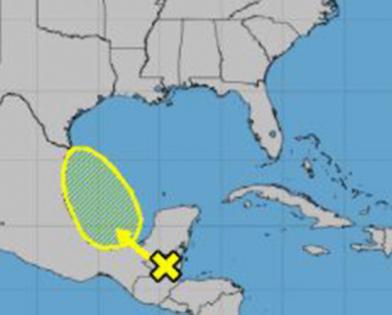 Rain showers and thunderstorms associated with a tropical wave located over northern Guatemala and southeastern Mexico have become better organized as the system treks toward the Gulf of Mexico, forecasters said.

Some “slow development” is possible over the weekend, according to the National Hurricane Center.

By Saturday night the tropical disturbance is expected to move inland over northeastern Mexico.

The system has the potential to bring rain as far north as lower Texas, an area in need of rain, according to The Weather Channel.

As of 8 p.m., the National Hurricane Center said its odds of developing into a tropical depression were at 40% in the next 48 hours, an increase over the 20% Thursday morning, and 40% over the next five days.

“Regardless of development, high pressure should steer the system inland over the weekend somewhere between Mexico’s northeast Gulf Coast and the Texas border,” the Weather Channel reported.

Forecasters said the system poses little or no threat to South Florida.

Despite the fact that there have only been three named storms so far this Atlantic hurricane season, experts still predict an above-average season.

Activity generally heats up near the peak of the season, which generally runs mid-August through late October.

The latest prediction from NOAA experts was 14 to 20 named storms and six to 10 hurricanes this season — three to five of which are expected to be major hurricanes, which are Category 3 or higher.

The next named storm to form in the Atlantic would be called Danielle.