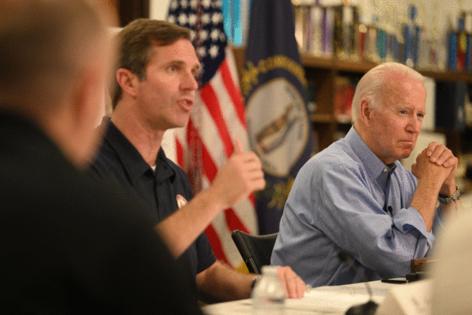 LEXINGTON, Ky. — President Joe Biden pledged during a trip to Kentucky that the federal government would be in the state for the long haul to help people in damaged communities recover from historic floods.

“I promise we’re not leaving,” Biden said during a news conference in Breathitt County Monday. “The federal government and all its resources, we are not leaving.”

The Bidens flew into Lexington Monday morning aboard Air Force One and then took a helicopter to Eastern Kentucky. They were accompanied by Gov. Andy Beshear and his wife, Britainy, as they met with flood victims. U.S. Rep. Hal Rogers and FEMA Administrator Deanne Criswell were also on the trip.

Criswell said more than 700 people from FEMA are on the ground. More than 134,000 meals have been distributed. So far, 800 people in the 12 counties covered by the disaster declaration have received more than $13 million in total aid.

Biden said the damage that Kentucky sustained was heartbreaking.

“You think to yourself, ‘what in God’s name happened?’” Biden said.

Beshear said during the news conference in Breathitt County that the state was going to add one death to the previous death toll of 37 after Aaron “Mick” Crawford, a high school football player in Knott County, fell ill while trying to help with cleanup and died. Beshear also said two people are still missing.

“This is the most devastating and deadly flooding event, certainly, in my lifetime,” Beshear said.

Rogers, a Republican who represents the flooded region, thanked Biden for a quick disaster declaration that allowed resources to start getting to people. Rogers complimented the resilience of Eastern Kentucky residents.

Ian is no longer a hurricane.

The now-post tropical cyclone has brought heavy rains, flash flooding and high winds to the Carolinas since reaching the coast Friday afternoon.

Ian previously left a stretch of the ...Read More

Cubans in several neighborhoods in Havana and other cities took to the streets again on Friday, banging pots and pans and demanding the restoration of electrical service as they had done Thursday, after a failure in Cuba�...Read More

MIAMI — Florida officials estimated more than 40 deaths across eight counties linked to Hurricane Ian, including from drowning and disconnected oxygen machines due to power outages.