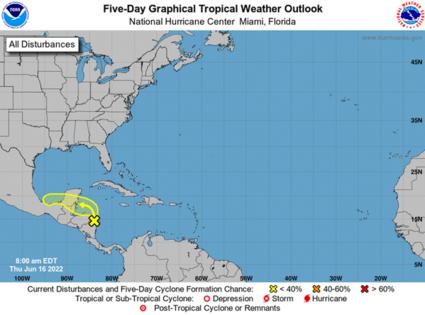 The National Hurricane Center gives a trough of low pressure located near over Honduras only a 10% chance of forming in the next two to five days, according to its 2 p.m. EDT Thursday tropical outlook.

The system is mostly a disorganized area of showers and thunderstorms, but could develop further after moving back over water, NHC forecasters said.

Odds for the system diminished since Wednesday, which had previously had long-term formation chances up to 40%. It was first identified Sunday evening, and was eyed with potential to become the Atlantic hurricane season’s second tracked system.

Tropical Storm Alex formed earlier this month from the remnants of a Pacific hurricane. While it had yet to be officially named by the NHC, it dropped nearly a foot of water over parts of Florida.

The second named system of the season would become Tropical Storm Bonnie.