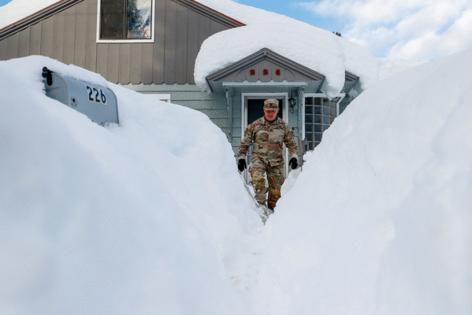 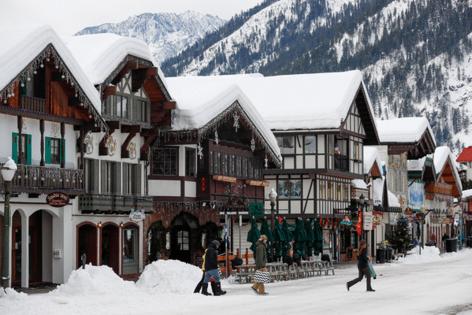 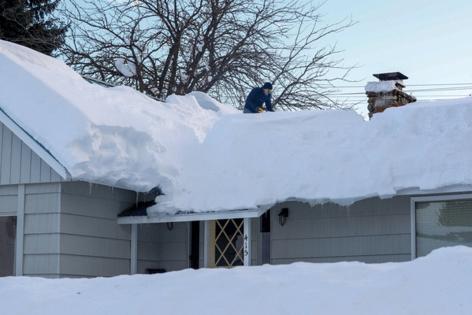 LEAVENWORTH, Wash. — Do you have any extra space? Would you like some snow? Leavenworth might be in touch.

The faux-Bavarian alpine town on the eastern slopes of the Cascades was still struggling to dig itself out Monday, after more than 4 feet of snow fell in less than 48 hours last week, clogging streets, shuttering businesses and causing fragile roofs to quake under the weight.

While the main streets are plowed, some smaller roads remain impassible. And when 4 feet falls all at once, it can't just be pushed aside. It needs somewhere to go.

Next to a church on Monday, down the block from the school district headquarters, a Caterpillar front-loader attempted to clear the street.

It lurched forward, its plow scraping the ground. The snow compacted, filling the 15-cubic-yard bucket. As it pushed, its tires, some 5 feet in diameter, spun and hissed on the ice, struggling for traction. The snow in the bucket pressed into the snow in front of it, which pressed into more snow, which compacted and hardened and hardened and ... the 20-ton machine skittered, slid and stalled out.

The driver lifted the bucket and reversed course. He executed an elegant K-turn in the narrow street. And he tipped the bucket, a hyper-localized deluge of snow, into the bed of an idling dump truck.

A handful of repeats and the dump truck's trailer was full, ready to haul its frozen contents somewhere, anywhere, with more room.

There is too much snow in Leavenworth to simply plow the streets. It needs to be hauled away.

"It's just getting it out of our city," said Leavenworth Mayor Carl Florea, who declared a state of emergency Friday after the record-breaking snowfall. "We've been dumping it in every available open space, basically."

There were twenty disasters ...Read More