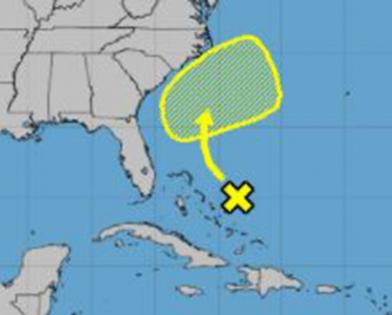 FORT LAUDERDALE, Fla. — An area of low pressure in the eastern Caribbean is forecast to move northwest for the next few days in the general direction of Florida and the U.S. East Coast. The chances of it developing into a tropical system remain very slim due to the presence of strong wind shear, according to the National Hurricane Center, but it may bring downpours to the southeastern U.S.

There’s still a 10% chance the system could slowly develop, but that window is narrow. It is expected to be absorbed by a slow-moving frontal system moving west to east later this week, the hurricane center said Tuesday.

Strong wind shear, currently present over the Caribbean, hinders tropical systems from forming. However, wind shear in the area is expected to decline in a couple of days, which would make the Caribbean much more conducive for storm development as the season continues, experts said.

October is one of the most active months for tropical activity in the Atlantic, particularly Florida.

If one more named storm forms this season — Wanda — experts say 2021 will rank third in the record books for the number of named storms generated in one hurricane season.

“Florida has been hit by about a dozen major hurricanes in the month of October since records began in 1851, which is more than any other state,” AccuWeather reported.

Hurricane Sam was downgraded to a post-tropical cyclone Tuesday in the far north Atlantic, located between Iceland and Newfoundland, Canada, the hurricane center said.

Wanda is the last remaining storm name for 2021, in a season that runs through Nov. 30. Any storms to form after Wanda would be named using an overflow list, which includes Adria, Braylen, Caridad, Deshawn, Emery, Foster, Gemma and Heath.

No additional tropical activity is forecast in the next five days, according to the hurricane center.