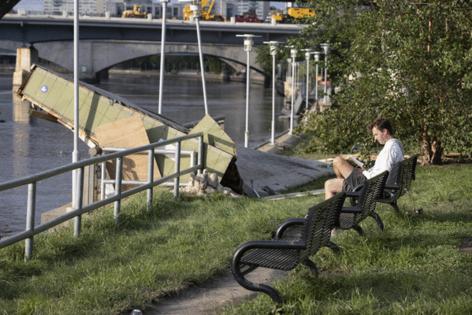 In the southeast, the agency has reported nearly 400 homes majorly damaged or destroyed as of late Tuesday, he said, and at least another 400 suffering minor damage.

The early approximations come as teams from PEMA and the Federal Emergency Management Agency continue their damage assessment in the region on Wednesday, a week after Ida wreaked havoc with heavy rains, severe flooding and multiple tornadoes.

The devastation in Philadelphia and its collar counties is “significant,” Padfield said Wednesday in an interview. Federal disaster relief “is highly probable at this point based on what we are seeing.” President Joe Biden approved an emergency declaration for New Jersey on Monday.

The agency is prioritizing the assessment of individual damage — the federal assistance that provides funds and services directly to people impacted by disasters — over the assessment of public damage that governments and nonprofits can have reimbursed by FEMA.

While the state has 30 days to request aid, Padfield said officials were working as quickly as possible to get people relief. Pennsylvania Gov. Tom Wolf, who was scheduled to tour damage in Bridgeport on Wednesday afternoon, will send the federal disaster request, the director added, once state officials feel they have enough data to feel fairly confident in its approval.

Padfield did not provide a specific timeline, noting factors outside PEMA’s control, but said “our goal is to make it the shortest amount of time possible.”

“The information we have right now is very favorable” for getting a disaster declaration, he added. And when a request is granted, FEMA can stand up services, such as disaster recovery centers, “in a quick amount of time.”

Padfield did not have an estimate on hand for the number of residents displaced by Ida, but dozens were reported displaced in Chester County alone as of Tuesday.

FORT LAUDERDALE, Fla. – Hurricane Larry is maintaining its intensity with 120 mph winds as it churns toward Bermuda, where a tropical storm watch could be issued Tuesday, according to the National Hurricane Center.