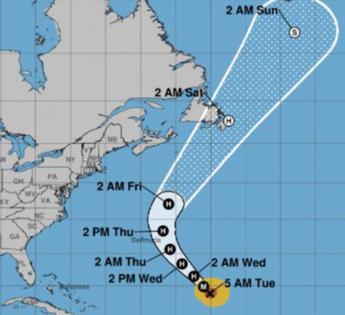 FORT LAUDERDALE, Fla. – Hurricane Larry is maintaining its intensity with 120 mph winds as it churns toward Bermuda, where a tropical storm watch could be issued Tuesday, according to the National Hurricane Center.

Larry is forecast to bring “dangerous and life-threatening” rip currents and swells to the east coast of Florida, the U.S. and Canada by midweek after passing Bermuda at hurricane strength.

South Florida isn’t likely to be significantly impacted by Larry, though waves between 4 and 6 feet could affect areas north of Palm Beach County such as Martin County, St. Lucie County, and Indian River County, according to National Weather Service meteorologist Don Harrigan.

Larry is forecast to pass east of Bermuda, making its closest approach Thursday. Because Larry is such a large storm, “impacts could be felt even if [Larry’s] center remains well east of the island as forecast,” the hurricane center said.

“It could be that [Bermuda] could get some sort of tropical storm-force winds or some heavy rainfall, certainly some deteriorated marine conditions,” Harrigan said.

As of 5 a.m. Tuesday, Larry was 830 miles southeast of Bermuda, moving on a path to the northwest at 10 mph. By Thursday, it is expected to speed up and turn north-northwest and north.

This season, Hurricanes Larry, Grace and Ida all had winds top winds greater than 125 mph, according to Colorado State University hurricane expert Phil Klotzbach. Only three other Atlantic seasons on record have had three hurricanes with top winds of over 125 mph by this point in September: 1933, 2005 and 2008, he said.

Forecasters are also watching an area of low pressure in the Caribbean, which is forecast to move across the U.S. Gulf Coast from Louisiana to the Florida Panhandle. It’s expected to cut across the Florida peninsula and move into the Atlantic, where some potential development could occur.