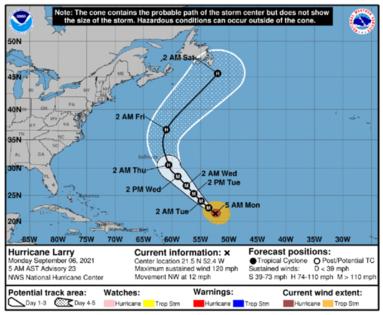 The 12th named storm of the year is 655 miles east-northeast of the northern Leeward Islands and 950 miles southeast of Bermuda with 125 mph maximum winds and is cruising through the mid-Atlantic at 10 mph, the NHC said in its 5 p.m. update.

No coastal watches or warnings have been issued at this time, but the NHC reported swells are affecting the Lesser Antilles and are expected to spread west to portions of the Greater Antilles, the Bahamas and Bermuda today through Tuesday.

“Significant swells should reach the East Coast of the United States and Atlantic Canada by midweek and continue affecting these shores through the end of the week,” said Brad Reinhart, NHC hurricane specialist. “These swells are likely to cause life-threatening surf and rip current conditions.”

Although the NHC projects some fluctuations in Larry’s intensity, little change in strength is forecast for the next few days.

Meanwhile, the NHC is also watching out for another possible storm system.

A low-pressure system is producing disorganized thunderstorms over the Yucatan Peninsula and is expected to move either northward or northeastward over the Gulf of Mexico. Not much growth is expected for this system thanks to some strong upper-level winds.

The NHC gives this system a 30% chance of becoming a tropical depression within five days.

The next storm name on the World Meteorological Organization’s list is Mindy.