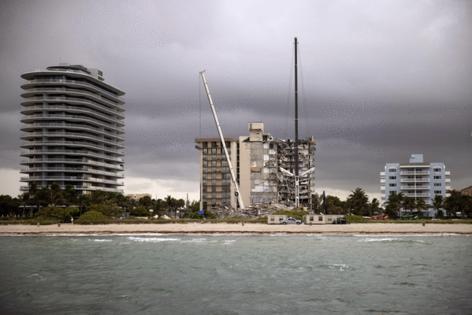 MIAMI — Tropical Storm Elsa, a record-breaking fifth named storm of the season, formed early Thursday in the Atlantic, with South Florida in its cone of uncertainty for early next week.

However, the National Weather Service in South Florida cautions that forecasters are still "very uncertain" about Elsa's track.

"Interests in Florida should monitor updates to the forecast for this system, but it is too soon to determine what if any impacts could occur there next week given the uncertainty in the long-range forecast," the National Hurricane Center wrote in its 5 a.m. Thursday advisory.

Elsa is the earliest-known fifth named storm recorded for the Atlantic basin in the "satellite" era, which began in 1966, according to the National Hurricane Center. The previous record was formerly held by Edouard on July 6, 2020.

Florida officials late Thursday said they had created a "contingency" storm plan for crews working at the partially collapsed building in Surfside, near Miami Beach, where more than 140 people are still missing.

Elsa was about 865 miles east-southeast of the Windward Islands, as of the hurricane center's 5 a.m. Thursday advisory.

The storm was moving west quickly at 25 mph with maximum sustained winds at 40 mph with higher gusts, and is expected to pick up its pace as it moves west-northwest. Tropical-storm-force winds extend up to 105 miles from the center.

While Elsa is expected to see additional strengthening during the next day as it travels over warm water, the storm's fast pace and its "potential interaction" with the mountainous area of the Greater Antilles could limit strengthening, the hurricane center said.

The system is forecast to pass near or over portions of the Windward Islands or the southern Leeward Islands on Friday before moving into the eastern Caribbean Sea late Friday. It is then expected to move near the southern coast of Hispaniola on Saturday.

The hurricane center says there's still a lot of uncertainty in Elsa's track after Day 3. Some models have it turning northward after interacting with Hispaniola. Other models take Elsa across western Cuba and into the southeastern Gulf of Mexico.

Elsa is expected to produce three to six inches of rain on Friday across the Windward and southern Leeward Islands, including Barbados. This rain may lead to isolated flash flooding and mudslides.

The hurricane center said there is a "risk of wind and rainfall impacts" for portions of the Virgin Islands, Puerto Rico, Hispaniola, Cuba, the Turks and Caicos, and the southeastern Bahamas through early next week.

WASHINGTON — Las Vegas visitors can still snap selfies with the mermaids swimming among tropical fish in the Silverton Casino’s massive aquarium and gaze at the colorful dancing water displays of the iconic Bellagio ...Read More