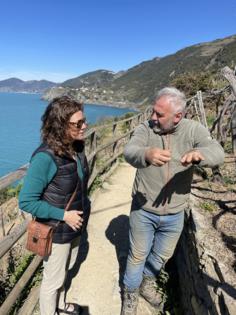 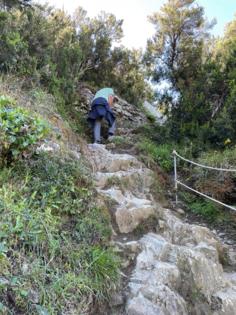 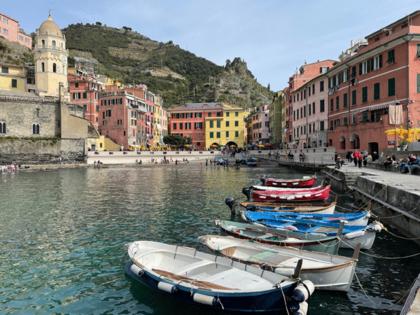 My husband and I had come to Cinque Terre at our daughters' recommendation during a longer trip to Italy. We were ready to soak up the five seaside towns and the hikes that connect them, but we found several other surprises in store, too. The first was wine.

"The most important thing to know about us is that we are not fishing villages," Crovara said emphatically as he gestured with his hands to drive his point home. "We are winemakers!"

And his family has been at it for the last century.

More than 1,000 years ago -- long before Italy became a country -- tiny villages emerged atop steep slopes along the seacoast where people could live in peace away from feudal wars and high above plundering pirates. Once maritime republics such as Pisa began to protect the area's seas in the 12th century, the villages were safe to move closer to the water's edge, where most remain -- the villages of Cinque Terre. Throughout the centuries, villagers have worked with determination to conquer their rugged land by building stone walls and terracing the steep landscape for gardens, olive trees and ancient grapevines.

In this wildly rugged land, only the heartiest vines can survive, and Crovara showed us how. First, he makes pergolas of wire that his sturdiest vines can grow upon. Then he trains them to grow with the wind so that strong storms can't break tender shoots and thicker vines can protect precious bunches of ripe fruit. After that, he prays for perfectly timed storms to sweep salty sea air over his grapes before harvest so that the resulting vintage bears the taste of the sea and minerals of the terroir.

Most of the wine produced in Cinque Terre is DOC-controlled to protect these specific flavors, and the jewel in their crown is the Sciacchetra. This sweet wine is served with rich cheeses or sweet biscuits at the end of meals and is made with tender care by some of the 4,000 people who call these villages home. These winemakers cut the grass beneath their vines, prune them and harvest their grapes all by hand -- and often lying on their backs beneath the protective pergolas.

The grapes are carried down hundreds of feet of terraced cliffs -- one basket or box at a time -- to cellars where each bunch is carefully dried for two months, inspected and destemmed by hand before being very gently crushed. The wine ages one to two years before it is finally ready to bear the local name, Sciacchetra, a special wine with a yield too small to be sold anywhere outside this rugged region.

And rugged it certainly is. The second surprise for us was exactly how vertical these five villages are. Each boasts charming narrow lanes -- too small for any vehicle -- that wind and climb with stairs and stone inclines throughout. Even a visit to the local cafe for fresh yogurt and cappuccino in the morning requires a heart-pounding climb.