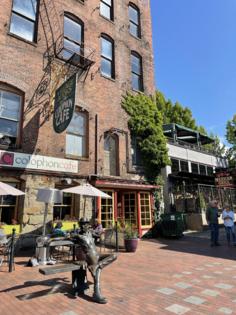 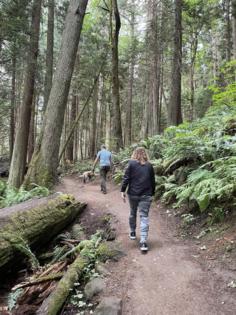 As our group wandered through downtown Bellingham, Washington, my college friend's teenage daughter gently tugged on my sleeve. She had spotted a small ice cream shop and wanted to conspire for a taste, so we nipped in. From an assortment of creative and exotic ice cream flavors we selected honey lavender and then rejoined the others, who were settled outside a nearby creperie waiting for their treat.

Such meandering is how most people pass a typical Saturday in this bayside town. We had come for a reunion of college friends to celebrate a milestone birthday and found an interesting complement of four villages that came together in 1903 to create the northernmost city in Washington. Situated right between Vancouver and Seattle, it is a place for shopping, learning, outdoor recreation and gastronomic delights. We were only there for a weekend but decided to dip our toes into each.

In addition to our snacking in Bellingham shops, we visited the farmers market, where local cheese, produce, cider, mushroom logs and soap were brightened by booths of flowers and shimmering jewelry. We also stopped into a sock store that sold hundreds of funny, artistic, political and kitschy designs -- many made by a local company. In a four-block area we were thoroughly entertained, but we were also quite parched.

Fortunately, Bellingham is known for its local craft brews. With 17 breweries currently in the county we had to give a few a try. Because we had teens in our crew, we used a local guide to decide where to go and wound up getting some savory sweet potato fries at one and delicious nachos and an assortment of yard games at another. The flights of beer tasters were a treat for me, and I learned that hazy IPAs are my new favorite. A tap trail map available at the breweries guided us from one to another and encouraged us to gather stamps at each as a way to earn swag. With only two days to visit, however, we had to pass.

Our team split up with some staying in to rest, but I joined the cohort headed down curvy, wooded Chuckanut Drive, the original road between Seattle and Canada. Our target was a family-owned shellfish farm on Samish Bay. Down a rutted gravel road along a railroad track we found a rustic shack beside stacks of baskets and crates. Signs near the shack told of the family's 130-year shellfishing history and explained their sustainable "tide to table" practices. Inside, a young man told us what had come in just today and offered us a bottle of sauvignon blanc to enjoy with the fresh oysters he was happy to shuck. We had to take ours on ice to go -- this time.

Our second morning started with a hike on the North Chuckanut Mountain Trail. Well-marked paths climbed up among thick-trunked Douglas firs and maidenhair ferns. The primordial forest surrounded us, making us feel as if we had stepped back in time. Waterfalls trickled and splashed to cool pools, and a banana slug the size of my hand made its way up a lush mossy tree. It was idyllic.

Back in town we explored galleries and shops in Fairhaven, another of the four villages that make up the city of Bellingham. Established in 1883 by Dirty Dan Harris, the town has a history of honoring the founder every April. Evidently the colorful character was known for his uncleanliness. Even his hotel was known for its dirty beds until a new wife came onto the scene.

He also had a temper and a taste for booze that led him to roll his hotel's piano straight into the bay after the hotel sold and the new owner refused to pay more for the upright. The debacle inspires piano races annually during Dirty Dan Days, when four teams roll pianos up the very hill he rolled his piano down. A statue of Dan lolls on a park bench and invites selfies that we couldn't resist.

Finally, it was time to grab our oysters and prosecco and go out to celebrate our birthday girl. We had arranged a crab boat to take us onto the bay for the afternoon. A misty morning had opened to a sunny afternoon, and the bay was calm. As we motored out to our crab pots, we shucked oysters and passed the bottle of bubbles. That must have brought us luck; each of us had a chance to lean over the edge of the boat and hook a pot of skittering critters. We learned how to identify gender and measure our catch, and we took lots of silly pictures before it was time to head back to the marina.