The Greener View: Are Wasps Beneficial? 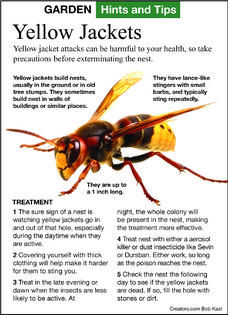 Q: My patio is being overrun with yellow jacket bees. I want to find the nest and spray them, but it seems that the nest isn't in my yard. A friend said they are beneficial insects. Are they really doing good for my garden, or can I just get rid of them if I find the nest?

A: Yellow jackets are not bees but are small yellow and black wasps up to an inch long. Bees are vegetarian in all life cycle stages, but wasps eat meat during at least some portion of their life. They are either predators or parasites of other insects, making them beneficial insects. Adults are useful pollinators as they search for nectar.

Yellow jacket colonies can be in the ground, in walls, under decks and in hollow trees. Mud dauber wasps make small nests of mud in places that don't get rained on. Paper wasps make small paper nests in hidden locations. Bald-faced hornets make huge paper nests that usually hang on tree branches but can also be attached to buildings.

Most large worker wasps eat pollen or nectar and are attracted to sweet foods like cans of soda or rotting fruit. They feed the young in the nest high-protein foods such as insects and spiders. Keeping human food sources cleaned up, including the removal of fruit that falls off trees like crabapples and pears will help reduce their interactions with people.

There are thousands of species of wasps in the world, and most are the size of a fruit fly. Most wasps, including the big ones, are beneficial because they pollinate flowers and eat caterpillars and spiders. On the other hand, when they start taking over the patio or deck, they are hard to live with. Since you have so many, it sounds like the nest might be nearby, and if they decide they need to defend the nest, there could be a serious medical problem.

To prevent a huge buildup of wasps, the best time to start controls is in the spring. Wasp populations start with a single female each spring, but by late summer when they are most noticed, a wasp hive can have thousands of individuals.

The inside of a wasp hive is similar to a beehive with individual cells for the young to grow in, but there is no honey, and the hive is typically abandoned over the winter and almost never used again. Just because there is a wasp problem this year doesn't mean there will be one in the future.

In hive-making wasps, a fertilized female survives the winter on her own hidden in the ground or a crack in a tree or building wall. In the spring, she makes a nest and lays some eggs for sterile females who become the workers of the wasp hive. The size of the nest and the number of workers increases all summer long. There can be hundreds or thousands of workers in a single nest by the time we reach fall. A few unfertilized eggs are laid in the fall and males hatch from them. A few female worker larvae are fed a different diet and become queens. Fertilized queens go away from the hive and the workers in the hives die over the winter.

It takes several weeks to go from an egg laid in a cell through the grublike larva stage that pupates and finally hatches into an adult. Only the adults are susceptible to insecticide sprays that are sprayed at a nest. New adults hatch every day and new eggs are laid if the queen is not killed.

If possible, leave the nest alone, but if necessary, it can be removed. After dark, when all the wasps are home for the night, set up a flashlight aimed at the nest opening. Don't remain near the light. Wasps can and will sting at night. Wear long-sleeved clothes with rubber bands on the entry points. Wasps tend to aim for the face of their victims, so wear a head covering too. Spray the nest hole or holes with a wasp spray.

If the nest is in the ground, dig up the whole nest when the adults are dead to completely destroy the nest and all the other life cycle stages that could continue to mature and hatch out of the nest. Stuff cotton balls that have been soaked with the spray into the entry hole of nests that can't be dug up or destroyed. Repeat sprays and more cotton balls may be necessary for a couple of weeks on large underground nests.

Q: My spouse wants an artificial Christmas tree. He says it is safer, but I think a fresh-cut one is better for the environment. Is it?

A: You might not think that cutting down a tree is good for the environment, but it ...Read More

You will see poinsettias everywhere this time of year, and if you are tired of them you might want to try the easy-to-grow Thanksgiving cactus. You probably have heard them be called Christmas cacti. There are three ...Read More

Q: When we bought our house, 10 months ago, we saw we have two small pine trees in the backyard. One is approximately 15 feet tall and the other about 10. On both, the needles are turning brown and dying, from the inside ...Read More

Q: My wife brought in a couple of branches of colorful leaves off a red maple. They were the first to have fall color and they worked very well in a flower arrangement. Upon close inspection we realized they were covered ...Read More