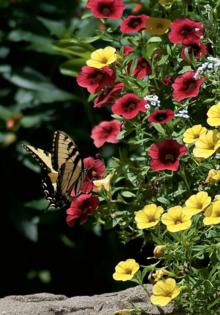 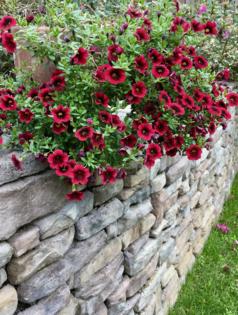 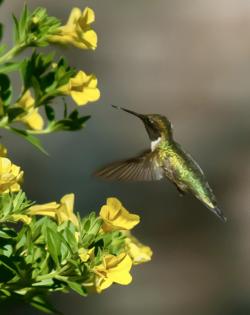 As I write this on April 3, today was the day the ruby-throated hummingbirds returned to my house. Oddly, it was a feast of the Calibrachoas Superbells. This story, however, starts the first week of October, which is when I planted them.

I’ve been touting this for zone 8 and warmer for a couple of years. To be honest, after what I have seen, I would definitely try them in zone 7, too. The problem, however, lies in the producer, the garden center and then in a large part, you, the gardener. In other words, are you a believer?

I plant in October for Supertunia petunias too, but for the sake of this column I am sticking with Calibrachoas Superbells. My first butterfly sighting of 2022 was Jan. 9, a large pristine cloudless sulphur on Superbells Grape Punch.

The winter turned pretty cold for a few weeks, a few 23-degree mornings and a boatload of days in the mid- and upper 20s. Then we entered a really warm period, kicking everything into a state of growth and blooms.

Spring had sprung, so to speak, and we found ourselves with blooming azaleas, loropetalums, flowering quince and camellias. The long-range forecast was looking favorable and then suddenly, well, you can guess. The forecast seemed to drop on a daily basis, predicting really cold temperatures in the low 20s for the morning of March 13 and a freeze on March 14.

I was speaking at the Dirt Friends Festival in El Dorado, Arkansas, that weekend and was helpless to try and protect. I did enjoy their episode of winter, acting like a kid, taking pictures and videos of the snowstorm in their arts district. It was beautiful.

I was expecting the worst when I returned home, and sure enough, the azalea blossoms were toast. When I looked in the backyard, The Garden Guy’s paradise, the Superbells and Superbena verbenas were still blooming profusely. The Supertunias, which had been budding up, suffered no damage either.

So, this brings me to now. The three ruby-hummingbirds I had today flew back and forth feasting on Superbells Pomegranate Punch, Grape Punch, Dreamsicle, and Yellow. These flowers are so extraordinarily colorful, and they bring joy. But add hummingbirds and swallowtails, and you may start to do the garden happy dance (or in my case I grab the camera).

Superbells will get about 12 inches tall with a 24-inch spread and packed with an extra-long season of enormous blooming potential. While I have had good luck growing them in raised beds rich in organic matter, their best performance will always be in containers with good sunlight. These that survived my cold winter were all in containers.

Be creative designing your mixed containers, whether they be baskets, window boxes, bowls, urns or extravagant clay pots like olive jars. This is also the time to use the best potting soil, nothing heavy with clay soil from the garden.

Since the Calibrachoas Superbells are such prolific bloomers, they are counting on us as gardeners to keep them fed. During the warm growing season, most of us water on a daily regimen, which will leach out the nutrients. You can use controlled-release granules per your formula recommendation, but don’t be afraid to use a diluted water-soluble fertilizer at least once a week like most of the commercial landscapers.

There are now 38 choices of Superbells for you to choose from. Even though my October-planted Superbells are in full bloom, I am looking for some I have never grown, like Black Currant Punch and Superbells Prism Pink Lemonade. I urge you to go to the Proven Winners website and see which colors, patterns and even doubles might appeal to you. Get yours planted soon for the long growing season ahead.

Blue My Mind and last year’s sibling Blue My Mind evolvulus are surefire winners of the 2022 Best Supporting Flower. This is for the flower that delivers an outstanding performance in a supporting role.

As I write this,...Read More

No longer will trays of flower transplants create a mess, a sore back from picking them up and clutter in the garden shed with thoughts of future use. Thanks to the Eco+ Grande Pots that caught most of us by surprise at ...Read More

A display at the recent Young’s Plant Farm Annual Garden Tour caused quite a stir — not only within the industry that day, but on my Facebook page as well. I would like to take credit and say it was my beautiful ...Read More

A feeling of euphoria came over The Garden Guy and I muttered to myself that my work on earth was done. OK, I am kidding to a point.

I am trialing two new agastaches, which I admit I am falling in love with: Meant to Bee...Read More