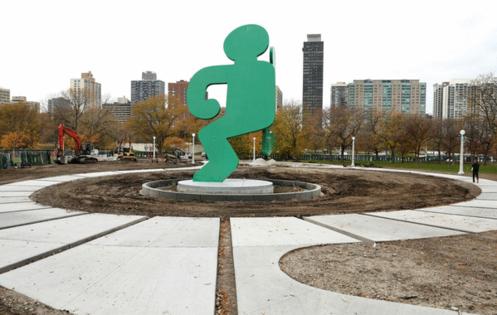 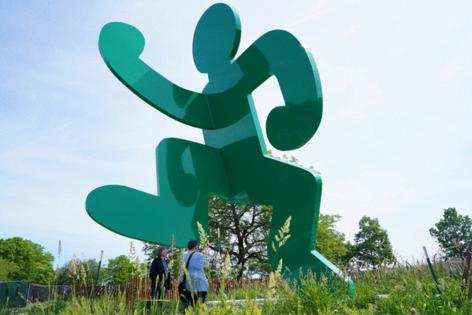 CHICAGO -- Owen Keehnen remembers when the AIDS epidemic, which disproportionately affected the LGBTQ community, was at its height in the late 1980s. The gay community in the United States was still largely in the shadows, said Keehnen, a writer and historian of LGBTQ history in Chicago.

Gay bars and gathering spaces had blackened or tinted windows so passersby couldn’t see in. But, Keehnen said, there was a place in Chicago were the LGBTQ community could feel safe while in the open, and that was the Belmont Rocks. A stretch of stone and grass on the lakefront from Belmont to Diversey harbors, the Belmont Rocks was a place the gay community from the 1960s to the late ’90s could gather with no blackened windows hiding them.

“Imagine how empowering it would be to get together in the sunlight,” said Keehnen, who used to visit the Rocks. “Right in the middle of the city, to claim this queer space as your own.”

In the late 1990s, the U.S. Army Corps of Engineers undertook a major revetment project and began the process of re-engineering Chicago’s lakeshore to safeguard against shoreline erosion. And in 2003, the limestone rocky area that was once a symbol of gay community and strength in Chicago was bulldozed.

Nearly two decades later, the Chicago Park District is set to open a park where the Belmont Rocks once stood: the AIDS Garden Chicago. The new garden strives to commemorate the lives of those lost in the epidemic and become a new green space in the community and for the city as a whole.

“This is a living, breathing garden and a place for education and reflection,” said Ald. Tom Tunney, who first conceived of the project in 2005.

Though the centerpiece of the garden — a 30-foot sculpture by the late artist and activist Keith Haring titled “Self-Portrait” — was first installed in 2019, ground was just formally broken on the AIDS garden project in June. The park is expected to be completed in early spring next year, according to Willa Lang, executive director of the Chicago Parks Foundation.

“We wanted to have a beautiful, warm, welcoming ribbon-cutting. And in order to do that, we have to wait until the spring,” Lang said.

Most of the garden has already been planted, Lang said, and most of what is left to complete is the infrastructure, like the bronze letters that will spell out AIDS Garden Chicago at the entrance.

Visitors enter the 2.2-acre garden from a lakefront path, which leads into a number of gardens and lawns, each with its own purpose. The entrance opens to a donor wall, then to a serpentine path that will be lined with markers indicating important dates in the AIDS epidemic.

At the end of the path is an open field, which contains the Keith Haring sculpture with an uninterrupted view of Lake Michigan. Another garden, designed for reflection, has yet to be constructed.

“We’re thinking about suffering, but then it’s also about hope, it’s about healing. So, while there are spaces for reflection, there also should be spaces for celebration,” said Manisha Kaul, the Chicago studio director for Design Workshop, the firm designing the AIDS garden.

The park will also contain gardens that community members can interact with directly and help maintain.

“The intent was to have a garden that people … can come and do, you know, what they want to do. And that was the ultimate sort of idea of acceptance, accepting and being accepted,” Kaul said.

A number of different elements are still in development, like an app Tunney is thinking of developing that would provide audio tours through the gardens. Tunney said these different components are being designed with the help of local organizations and community members.

First and foremost, Tunney said, is the input of the community and providing a valuable educational experience.

By the end of the 20th century, nearly 775,000 people had contracted AIDS, which is caused by HIV, and 57.8% of those people had already died, according to Centers for Disease Control and Prevention data. The epidemic only turned around in 1995, when a new class of drugs became available that turned what was frequently a death sentence into a chronic condition. By 1996, AIDS was no longer the leading cause of death in young American adults, although it remained a leading cause of death for young Black people.

Now, the CDC says, most people with AIDS can achieve “undetectable” status, meaning the virus cannot be found in the infected person’s blood with the help of daily medication. Those with undetectable levels are able to safely have sex without transmitting the virus to their partner.

Still, the CDC reported that 36,801 people received an HIV diagnosis in the United States in 2019, with Black and Latino people disproportionately affected. According to Tunney, education is one of the key purposes of the garden.

“Our goal is to eradicate HIV,” Tunney said. “Our generation, especially the people that are survivors, really have a responsibility to not forget.”

Part of the mission of remembering is keeping alive what Keehnen calls “fragile history,” the memories of those who lived through this point in Chicago’s LGBTQ history.

“The Belmont Rocks, they were never a headline,” Keehnen said. “They were part of life, but then they were gone and that whole importance of that queer space was in danger of disappearing as well.”

Lang said that sometimes she sat out at the half-completed garden to think and strategize, and people walking by would often ask her what the project was about. After she told them, some would share stories with her.

“They said, ‘Oh, I met my husband here’ or ‘This is where we would all come together,’” Lang said. “And there were sad stories. People were like, ‘We met our friends here, and then the next week, they didn’t show up.’ The stories are just heartbreaking.”

That experience inspired Lang to start an archive of their stories, “a digital quilt” like the AIDS Memorial Quilt housed at the National AIDS Memorial in San Francisco.

The digital archive, available on the AIDS garden’s website, shares a few stories of the tens of thousands of Chicagoans who lived and still live with AIDS. Keehnen simultaneously is working to chronicle the “fragile history” of the Belmont Rocks, partially through a Facebook page, “A Place for Us: LGBTQ Life at the Belmont Rocks.”

The Belmont Rocks were once a place for members of the gay community to hold barbecues, have parties or just be themselves.

Tunney hopes that, in place of the Rocks, the AIDS garden will be a reminder of all the LGBTQ community has endured and a tribute to their strength and resiliency.

“Unfortunately, it took the AIDS epidemic for a lot of people to come out and say, ‘Hey, we deserve rights,’” Tunney said. Whether it’s marriage rights, health, rights, equity rights, access to public health … This is the educational part of it. We really want this epidemic to end.”

The Garden Guy wasn’t stopping to smell the roses, but instead stared in awe at the form of a rosebud. Even though this new rose variety called Suñorita is considered a miniflora, the bud looked like a classic tiny ...Read More

The African elephant is known for having the longest gestation period of any animal, which lasts up to 22 months. This is the proverbial New York minute when it is compared to bringing a new shrub to market. Take, for ...Read More

Unlimited pasta was last served at the Orlando-based chain in 2019.

“As we look forward, we don’t know if we’ll bring and when we�...Read More

Planting conifers in mixed containers has been at the top of The Garden Guy’s fall and winter project list. My wife, Jan, doesn’t even know — this has really been a secret operation to get more conifers in the ...Read More

As I was watching a fresh newborn Gulf fritillary swooping down to feed on Superbena Royale Plum Wine verbenas, I started thinking that I wish everyone knew about these flowers that our grandparents grew and certainly ...Read More