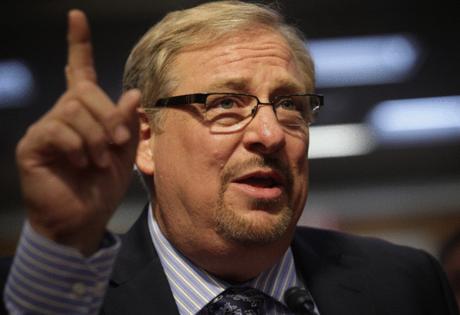 Pastor Rick Warren, who ministers weekly to a global audience of more than 40,000 people and has offered spiritual guidance to multiple American presidents, announced on Thursday the successor who will lead the Saddleback Church he founded nearly 43 years ago in Orange County, California.

Taking the helm in September when Warren and his wife, Kay, expect to retire from leading the church will be Pastor Andy Wood and his wife, Stacie, of Echo.Church in San Jose.

Warren plans to deliver his final preaching series on Sept. 3 and 4.

“Kay and I believe so much in this couple,” Warren said. “We love them so much, and we are confident that God has prepared and chosen them to take up the baton and run the next leg of the Saddleback marathon.

“We truly, deeply, confidently and unreservedly endorse this couple to take our church to the next level of growth and impact.”

An emotional Warren first announced his selection – church elders confirmed the choice of Wood – during a more than hourlong, all-staff meeting at Saddleback Church. Shortly after that, he sent a message Thursday afternoon to his vast congregation.

The announcement comes a year after Warren announced plans to retire and told his congregation about his search plans.

In his video message to the Saddleback Church community on Thursday, Warren discussed his decision, including that Wood was selected from more than 100 “potential, purpose-driven pastoral candidates, interviews and countless prayers.”

Warren said he looked for “a proven leader” and someone who exemplified “the biblical qualities described in the books of 1st Timothy and Titus.” And, someone who is can lead a church with the impact of Saddleback.

Much like Warren and his wife, Kay, both 68, Wood, 40, and his wife, Stacie, a teaching pastor at Echo.Church, also took a cross-country road trip from Texas to start their ministry.