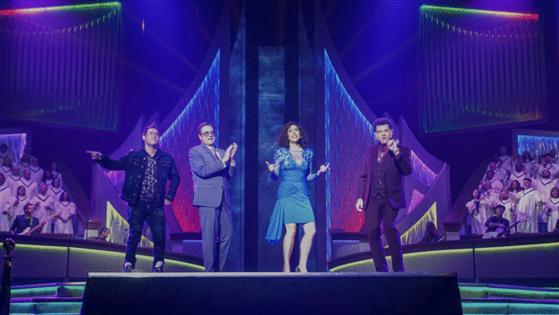 “The Righteous Gemstones” threads a thin line: making fun of megachurches without alienating their parishioners.

The HBO series, which last week returned for its second season, lives in the world of diamond-plated crosses and church merchandise, taking a religious family of supposed true believers and twisting them into power-hungry money-grabbers. But they do it from a church pulpit every Sunday.

“I asked (creator Danny McBride) and he said a lot of churchier people get a thrill from the show because they have to live among the hypocrisy of their church,” Eric Andre, who joined the cast this year, told the Daily News.

“I thought he’d get hate mail from the Jerry Falwell Juniors of the world.”

Some of that concern was availed when, weeks after wrapping the second season, a plumber found $600,000 in cash hidden behind the toilet at Joel Osteen’s church in Texas. Nothing McBride could come up with for his show would ever beat the reality of the world of megachurches.

Tim Baltz, who stars as Judy Gemstone’s husband BJ, recalled asking his aunt, a nun, if she would be offended by the show. Instead, he said, she told him that it was “unfortunate” that people like this exist in the world.

Roberts spoke of his own family, “very religious and… very Southern and… very agrarian.” When he was a young boy, he and his friends would lay down on a hill on his grandfather’s farm and watch the neighboring church baptize the congregation twice a year in the river that ran through his property.

“They’d cry and scream and praise the lord and it was very emotional. For a little boy, this was quite an event,” Roberts said, mimicking a Southern drawl.

“My grandmother was very religious and she’d explain to me, ‘That’s the only way you get to heaven. If you’re not baptized, then the gates to heaven aren’t open to you.’”

All of his family members who would be offended by “The Righteous Gemstones” are dead by now, he said. The rest would find the humor.

The show is careful to find its humor not in the parishioners in the seats but rather in the religious leaders preaching from above.

“What we are taking aim at is hypocrisy and that I think everybody can get on board with,” Adam DeVine, who stars as Kelvin Gemstone, told The News. “And if you don’t, maybe you have to question yourself.”

The cast, though, isn’t scared about ruffling a few feathers if that’s what it comes down to.

“Of course there are going to be fanatics,” Tony Cavalero, who plays reformed satanist Keefe, told The News, “but they’re going to get just as pissed off as ‘Friends’ as our show.”

McCabe is the executive director of the Pope Francis Center, a day service for homeless people currently running out of ...Read More